The European Space Agency's (ESA) Mars Express spacecraft captured an image of a creepy crater that resembles an eyeball staring out from the Red Planet's surface. The "veins" that run through the 30 km-wide crater are likely channels that carried liquid water on Mars some 3.5-4 billion years ago.

The Mars Express spacecraft has been sending imagery back from Mars since 2003. It has provided information of Mar's surface by "mapping its minerals, identifying the composition and circulation of its tenuous atmosphere, probing beneath its crust, and exploring how various phenomena interact in the Martian environment," according to ESA. An image taken by the spacecraft on April 25, 2022, has ESA and others imagining an eerie eyeball staring out from the Martian surface.

A variety of materials is thought to make up the surface of the crater, as expressed through the different colors in the surface surrounding the unnamed crater. The color-coded topographic image shown below reveals parts of the scarred landscape that makes up the area. The image was created from data collected by ESA's Mars Express, and based on a digital terrain model of the region. Low lying areas are indicated by the blues and purples, while higher elevations are shown in whites and reds.

Inside the crater, the lighter surface is marred by a dark dune field. It is thought that the crater contains more buttes and cone-shaped hills, which is evidence that the interior of the crater is made up from many different materials.


The image is from the Aonia Terra region of Mars, which is known for its craters. The area is named after a feature called Aonia, a darkened patch on Mars that can be seen from Earth, even with basic telescopes. Aonia is also known from ancient Greece, where it referred to a sacred location of the Muses, the goddess of literature, science and the arts. 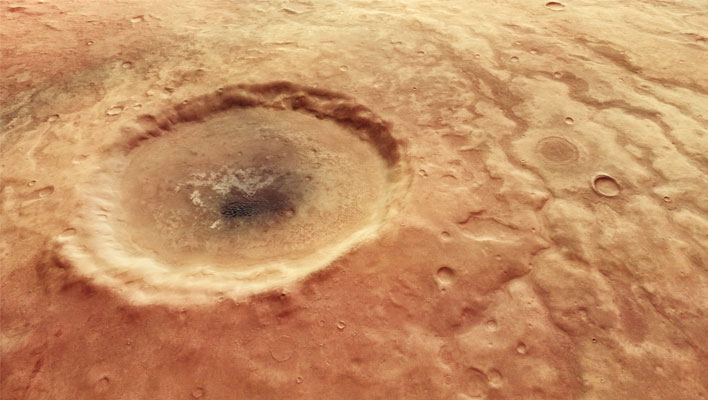 
The new images were captured by the Mars Express's High Resolution Stereo Camera (HRSC). HRSC has unveiled a lot about the diverse surface features of the Red Planet over the years. Those features include wind-sculpted ridges and grooves, volcanoes, impact craters, tectonic faults, river channels, and ancient lava pools.