Have you ever dealt with slow internet speeds and just became fed-up with the entire situation? Subsequently, have you thought of raising a ruckus somewhere to get your complaints heard and the situation rectified? Meet Aaron Epstein, a 90-year-old gentleman who became the hero of the internet for a day, after he took out an ad in the Wall Street Journal to complain about his AT&T services, or should we say lack there-of.

Earlier in February, Mr. Epstein found his AT&T internet speeds to be incredibly slow, averaging around 3 Mbps in North Hollywood (which sounds insane). Because traditional methods, such as contacting customer service, were not working, Epstein took out a quarter-page ad in the Wall Street Journal published for Dallas and Manhattan. Ars Technica, who broke the story, spoke to Mr. Epstein, explained that “He chose the Manhattan edition to reach investors who might want to pressure AT&T into upgrading its network and Dallas because that's where AT&T is headquartered.” Bravo, for that smart move, Mr. Epstein. 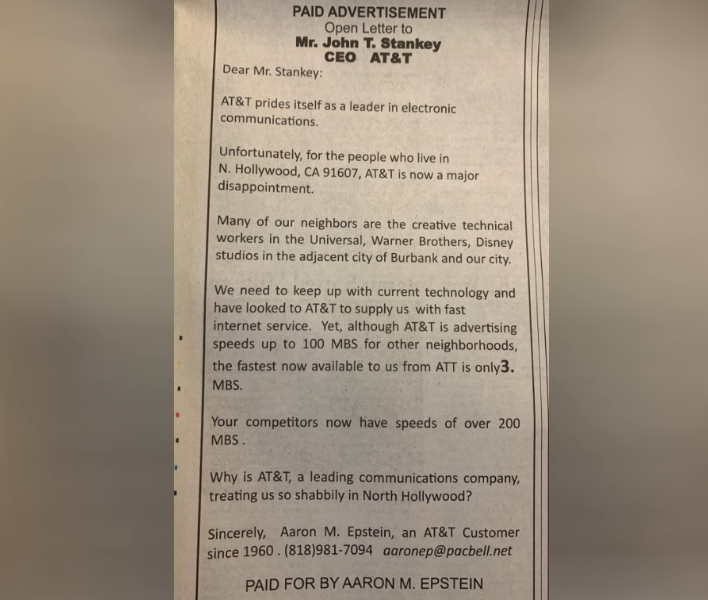 The ad shown, posted by @raju on Twitter, ended up costing Mr. Epstein nearly $10,000, but it appears that it may have been worth it. Yesterday, Ars provided an update explaining that AT&T scrambled to provide 300Mbps fiber internet to Epstein’s home. Now, AT&T only has to complete the expansion of fiber in the neighborhood before more people take out quarter-page ads. According to AT&T, it would be “cost prohibitive” to install fiber to everyone in the neighborhood immediately. To that excuse, Mr. Epstein proclaimed, “You're a communications business, stay out of the movie business. Invest your money in what you're supposed to be doing.”

Mr. Epstein, not only are you a wise man but we love your style.


Simply put, Aaron Epstein of North Hollywood, CA 91607 is an awesome person who is willing to stick it to internet service providers that are milking subscribers, and we applaud that. Hopefully, more people can hold ISPs accountable for improving infrastructure, or perhaps we could see the internet become a utility in the future, making this a moot point. In any case, let us know what you think of Aaron Epstein’s methods in the comments below.
(Top Image Courtesy of Anne Epstein And Ars Technica)