Make America Great Again With The Freedom Phone, Except Sorry It's Made In China

It is not often a snake-oil product comes up in the realm of technology, but it seems the “Freedom Phone” fits that bill. Featuring no reported specs, construction in China, and a 4x markup from Alibaba, all while touting itself as a “free speech and privacy first focused phone,” the Freedom Phone seems to be more of a scam than a device to save democracy.


On July 14th, the “world’s youngest Bitcoin millionaire,” as if that already did not have side effects, Erik Finman, announced the “Freedom Phone.” He claimed that this is “the first major pushback on the Big Tech companies that attacked us - for just thinking different.” Unfortunately, on the website for the device, we only know that it costs $499, has a 6” screen, has a dual sim and MicroSD slot, and comes with preinstalled apps for Newsmax, OANN, and Parler.

This is the first major pushback on the Big Tech companies that attacked us - for just thinking different.

Complete with it's own Uncensorable App Store & Privacy Features.

Furthermore, it has a reskinned version of Android called FreedomOS, and an “uncensorable app store,” so you can download any apps you want. Surely that cannot go wrong though, as Apple and Google only invest millions or billions in keeping malware out of their app stores.

There is also a tool called “Trust” installed, which allows users to control what their apps do whenever they want. Reportedly "Trust" can “help you understand the security of your device and warn you about possible threats,”as well. However, the Freedom Phone website does not explain any of the other ways it claims to keep people secure other than basically saying, “Just trust me.” 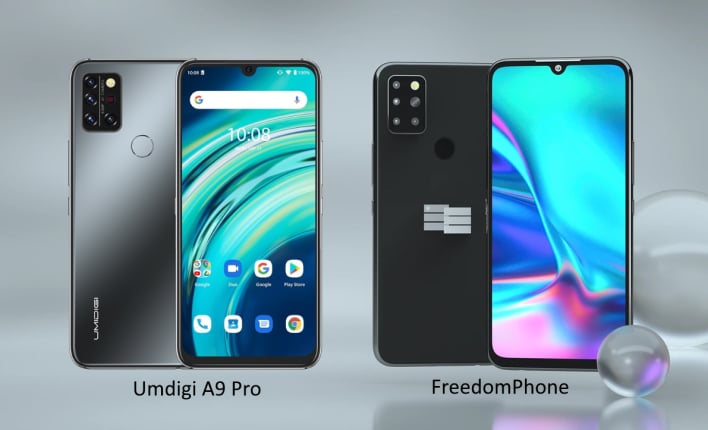 While this may sound “hunky dory” to some, there are some flaws that potential buyers should know about before making a purchase. First and foremost, you can find the UMDIGI A9 Pro on Alibaba, the Eastern competitor to Amazon, for just $118. It happens to have the same button layout, camera stack, and hole punch camera, but that is because it is the same device for much cheaper. Interestingly, we do get to see more of the specifications here such as 6GB of RAM, 128GB of storage, and a MediaTek Helio P60 processor inside.

Now that we know what the processor is, we were able to do some digging and found that the MediaTek Helio P60 (known as the MT6771) has had some severe security issues in the past. These issues include a vulnerability that would allow a local attacker to obtain root permissions on the device, but this is not likely the only issue as there are potentially many more flaws within the Freedom Phone.

With all these issues and lack of clarity, it seems the “Freedom Phone” is more of a “Scam Phone,” with features that anyone could apply to their phone. For example, anyone can install a VPN, sideload apps like Parler, and install privacy-oriented apps, or restrict what their phone’s apps can do with some simple research. In short, people have wanted privacy on their devices for years, and it only takes some Google searches to figure out, not hundreds of dollars in markups for a rebranded Android device.