Madden NFL 20 Simulation Predicts 49ers-Chiefs Super Bowl Winner But Could It Be A Curse? 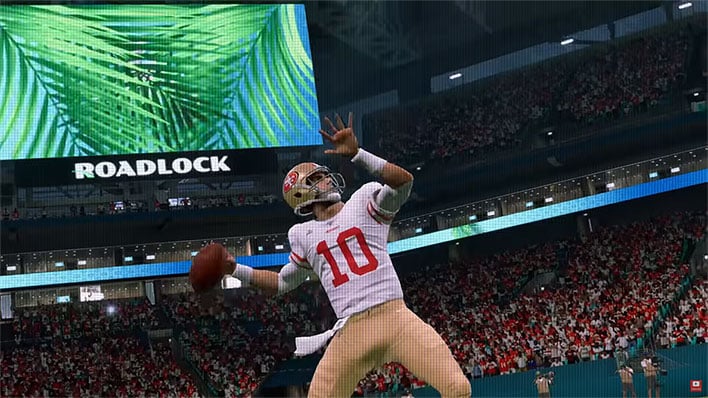 For the past 16 years, Electronics Arts has been simulating the Super Bowl using the artificial intelligence (AI) engine in its Madden NFL video game series, and as you might imagine, the results are not perfect. Madden NFL does have a winning record, though, and the latest release, Madden NFL 20, will look to add another win to its resume by simulating Super Bowl LIV.
Sadly, this year's Super Bowl does not feature Bill Belichick (greatest coach ever), Tom Brady (greatest quarterback ever), and the New England Patriots (greatest NFL team ever). I say all that as a slightly (heavily) biased displaced New England native. Fortunately, however, the match up between the San Francisco 49ers, led by Jimmy Garoppolo, and the Patrick Mahomes-led Kansas City Chiefs should be a high scoring affair. Two of the league's most explosive QBs will take the field for the ultimate prize.
So, which team will win? Madden NFL 20 thinks it has the answer...
If the AI engine proves accurate, the Chiefs will edge out the 49ers with a 35-31 victory, with Mahomes delivering an "incredible performance." The simulation predicts a close affair. In the first quarter, the 49ers draw first blood on a 16-yard run to pay dirt. A bit later, 49ers kicker Robbie Gould adds to the lead with a 41-yard field goal. Meanwhile, the Chiefs come up blank in the first quarter.
By halftime, the 49ers lead 17-14, then in the second half, it's basically a shootout. After being bounced by the Patriots in overtime during the AFC Championship last season, Mahomes wills the Chiefs to redemption with a late fourth-quarter drive to win the Super Bowl.

That's how the simulation goes, anyway. Will it actually play out that way? Only time will tell. In the meantime, it's worth noting that the Madden simulation's record thus far is an impressive 10-6. That's sometimes good enough to make the playoffs.

On the flip side, Madden NFL has hit a bit of a rough patch. Last year, it incorrectly predicted the Los Angeles Rams would defeat the Patriots, and the year before that, it had the Patriots beating the Philadelphia Eagles, which also turned out to be wrong (drats!). So Madden NFL 20 is on a two-game losing streak, and is just 2-4 over the last six Super Bowls.

Here's a look at every previous prediction...

I personally think Jimmy G and the 49ers will get it down, which would put the Madden NFL simulation on a three-game losing streak and a 10-7 record overall. However, Mahomes has looked unstoppable at times, so who knows.
Who do you have winning the Super Bowl? Sound off in the comments section below!