Google's annual developer conference kicks off today, marking a return of the Google I/O event after it was cancelled last year due to the pandemic. It is a multi-day affair, running from today through May 20, and will cover a bunch of topics throughout. While you might not have the bandwidth to watch the entire thing, you can check out the livestream at your leisure.
It starts with a pre-show at 9:40 am PT (12:40 PM ET). Then the event begins in earnest with a Google keynote commencing at 10:00 am PT (1:00 pm ET), followed by a Developer keynote at 12:15 pm PT (3:15 ET). If you are not able to attend those in real-time, fear not, things should get interesting at 4:30 pm PT (7:30 pm ET) when Google discusses "What's new in Android."
How can you watch the livestream? Just stay right where you are, as we have embedded it below...
As for what to expect at Google I/O 2021, it is going to be a busy event with a robust schedule covering a plethora of topics. Android 12 will be among them, and hopefully that means we will get a look at the fresh coat of paint to the UI that is headed to Google's mobile operating system. Rumor has it Android 12 represents a pretty big revamp.
We could also see some hardware announcements. Google probably is saving its Pixel 5a 5G smartphone launch for a slightly later date, but perhaps it will unveil a slimmed-down version of its Pixel Buds 2 called Pixel Buds A, as rumors have indicated.
Moving away from the rumor scene, we know for sure Google will make some kind of Google Assistant announcement or offer up an enhanced demonstration of some sort. Google hinted at this in a blog post last month, and there is an Assistant keynote scheduled for May 19 at 9:45 am PT (12:45 pm ET). Later that same day, Google will discuss developments in its smart home line too. 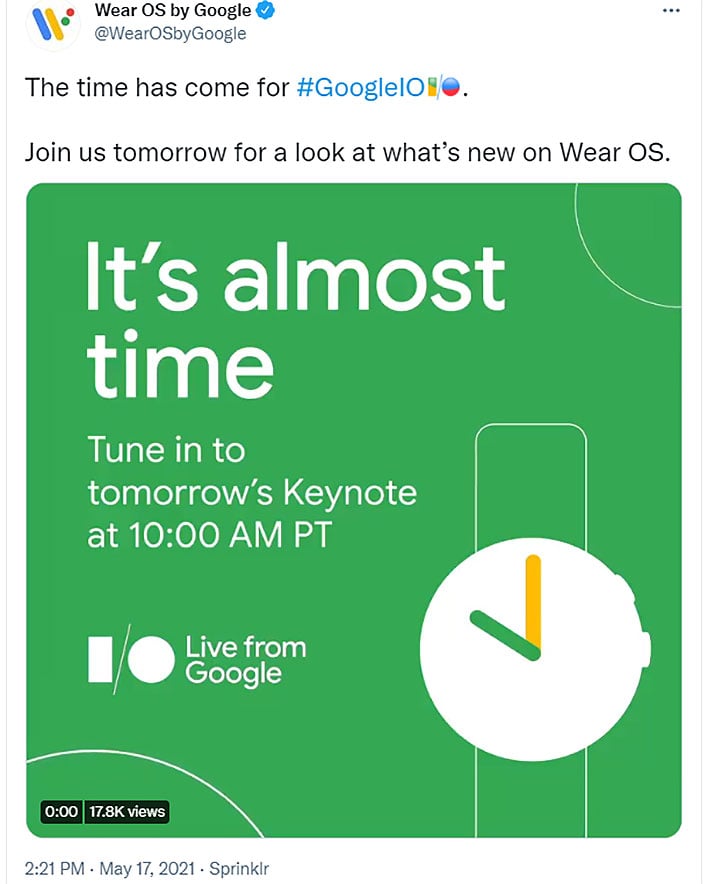 Leading up to the event, Google also teased some kind of Wear OS announcement. Exactly what that will be remains to be seen, but if going back into rumor territory, there has been chatter that Samsung could kick Tizen to the curb and adopt Wear OS for its Galaxy smartwatch line. Specifically, it's said Samsung's Galaxy Watch 4 and Galaxy Watch Active 4 could run Wear OS instead of Tizen.
Beyond that it is anyone's guess. Looking at the Twitter thread, some people are hoping the Wear OS announcement will include support for Google Pay on NFC-enabled hardware in more territories. As things currently stand, to use Google Pay on a Wear OS device you need to be in Australia, Canada, France, Germany, Switzerland, Italy, Poland, Russia, Spain, UK, or the US, and use a supported watch.
Is there anything you are hoping will be announced at Google I/O 2021? Sound off in the comments section below!