As smartphone companies continue to push the envelope of what a small screen is capable of, TV manufacturers are attempting to push larger screens capabilities as well. With that in mind, LG is set to announce two new flexible OLED solutions at CES 2022.

Smartphone companies have been pushing the envelope of mobile screen technologies, with an eye towards foldable designs. Samsung, and most recently Honor and Oppo, have introduced the world of foldable phones to the market. It seems TV makers are not going to be left behind in the advancement of screen technology, though. Case in point, LG has announced that it will be unveiling two new flexible OLED screen solutions at next year's CES. One will make exercising feel more immersive, while the other will have gamers dreaming of a more relaxing means of playing during those long gaming sessions.

The two new announcements are only concepts at this time, but LG wants to show the world the strong potential and wide versatility of OLED in order to create new markets. The concepts are known as "Virtual Ride" and "Media Chair." The first seeks to bring the OLED experience to exercise, while the second focuses on bringing new and innovative ideas to the couch potatoes of the world.

LG's Virtual Ride is being billed as a futuristic indoor stationary bicycle with three vertical 55-inch OLED displays in front of and above it. The idea is to create one large, curved, r-shaped display that will provide users with an immersive view both forward and above. The display that bends in order to create the ceiling above the rider has a curvature radius that extends 500R, or a radius of 500mm. LG says that this is the most among any existing large displays and shows off its superior flexibility. 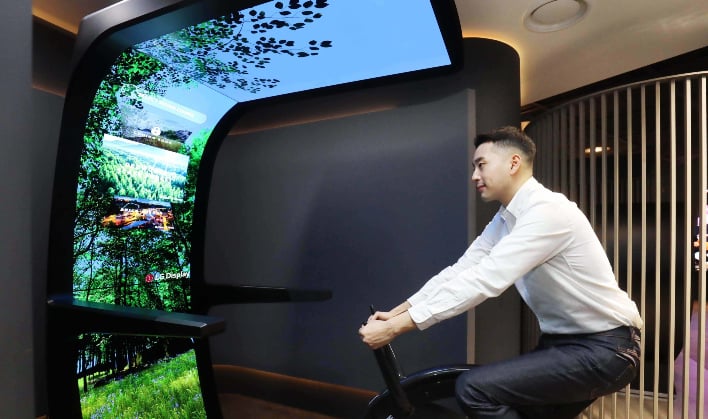 The futuristic design should deliver an entirely new immersive experience, while improving both the mood and ambiance in whatever room you decide to place it. So, whether you decide to take a bike ride through a European village, or make a trek through a picturesque forest, the OLED displays will provide unparalleled lifelike colors with a vivid picture that will make you feel as though you were actually there (or so LG claims).

The second of the new OLED experiences LG is said to be showing off at CES 2022, is a media consumption station referred to as the Media Chair. The idea behind this is quite simple. Begin with a 55-inch OLED TV display and then incorporate it into an extremely comfortable recliner. The screen has a curvature radius of 1500R, which LG states as being the optimal angle for the user. It also includes the company's built-in sound technology Cinematic Sound OLED (CSO), which gives the display the ability to vibrate to make its own sound without the need of any external speakers.

But wait, there's more! Included is also the ability to pivot the screen from landscape viewing to portrait viewing with the touch of a button located on the armrest. This allows the user the unique ability to customize their immersive viewing experience thanks to the OLED technology to fit whatever content you may decide to view.

The picture on the OLED screen will boast tens of millions of self-emitting pixels to eliminate the need for a separate backlight. This not only allows for it to produce an excellent picture quality, but also to come in various form factors such as bendable, foldable, and rollable (sounds like what smartphone manufacturers are doing, eh?). This new type of technology allows for it to be integrated into other areas outside the general consumer. These include furniture, construction, shopping, and interior industries.

The way we consume media is constantly evolving, bringing new and exciting ways to immerse ourselves into what we are viewing. Whether it be a smartphone with a foldable screen that allows us to carry a small tablet in our pocket, or a TV that curves in ways that bring us further into the viewing experience, technology and those that make it are clearly not content with remaining idle. As companies continue to advance the tech that is involved in our media consumption, time will only tell where we will end up next.