Future smartphones coming out of LG are going to look a little different than current ones. The South Korean electronics maker shared a bit about a new design language it plans to implement on its upcoming flagship phones, which includes a better looking camera arrangement on the rear and a more strategic curves.
The latter is part of what LG is calling its 3D Arc Design. This basically entails making the edges of the display and the rear symmetrically curved for a "much more natural feeling" when holding the smartphone, compared to previous LG handsets. It also means "less sharp edges" and angles that are intended to both give the phone a sleeker look and make it more comfortable in the hand.
"Our upcoming smartphone will draw on the rich history of classic LG designs which have always been distinctive at first touch," said vice president Cha Yong-duk, head of LG’s Mobile Communications Design Lab. "This handset will be a first-look at the competitive edge we will be bringing to every LG smartphone going forward."
I'm not quite sure what exactly LG is referring to when with its promise of less sharp edges—today's premium handsets (and even mid-range and entry-level phones) already utilize curved edges. The renders LG is providing don't offer much clarification, either. 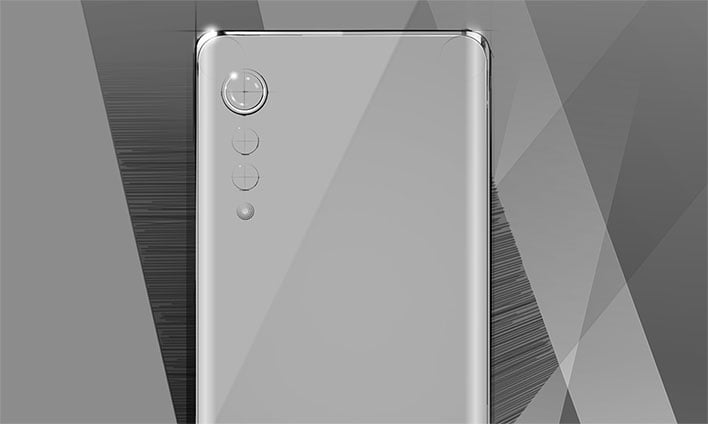 What I'm more excited about, however, is a "raindrop" camera arrangement. Let's face it, today's high-end phones with multiple camera sensors are great and all, but the increasingly large camera bumps on the rear look a little silly. There are even skins available that play on the aesthetic, like the one of Arnold Schwarzenegger holding the iPhone 11's camera bump like a missile launcher.
LG is taking things in a different direction.
"Contrary to the trend of the squarish camera bump seen on many of today’s high-end smartphones, the upper-left corner of the LG phone’s backside hosts three rear cameras and an LED flash in descending order by size, meant to evoke images of falling raindrops," LG explains.
The main camera slightly protrudes from the surface, while the other two sensors sit underneath the glass. It not only looks better (in my opinion), but takes up less space.
LG did not say when exactly these design changes will manifest in a new phone. That said, it is rumored the company will unveil a new handset in mid-May, so perhaps we will see the changes then.