Call it a shortcoming or a flaw or whatever you want, but one of the biggest downsides of OLED TVs compared to mini LED panels is they simply don't shine as bright. That's the tradeoff for the superior picture quality that OLED tech typically delivers, with perfect black levels, vibrant color reproduction, and the absence of blooming, an inherent flaw of backlit technologies. But what if you could have both the picture quality of OLED and competitive brightness levels? That's the promise of LG's new 'OLED EX' TV technology.
Unveiled ahead of the Consumer Electronics Show (CES), LG says its next-generation OLED EX display fuses deuterium, one of two stable hydrogen isotopes, with a custom, personalized algorithm to boost the brightness by up to 30 percent compared to other OLED displays. That's a potential game-changer, depending on the actual brightness rating and how it performs across different types of content.
For comparison, the folks at Rtings measured a peak SDR brightness of just over 400 nits for LG's popular C1 OLED TV, while HDR content peaked at 767 nits (2 percent window).
I've talked about this in other articles, but brightness was the determining factor when I opted for a Samsung Neo QN90A with mini LED backlighting over an OLED display when I upgraded my TV earlier this year. The same site measured peak SDR and HDR brightness levels of 1,372 nits and 1,540 nits (25 percent window), respectively, on the QN90A. 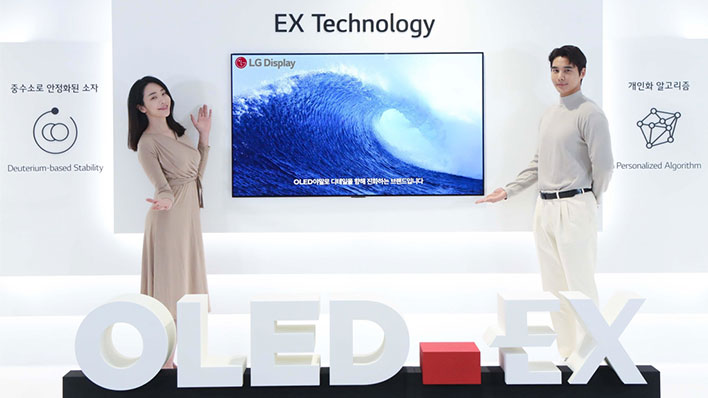 Brightness isn't the end-all-be-all, but it can certainly help in less-than-ideal viewing conditions, like a living room with multiple windows for natural lighting to spill into. I would have preferred OLED—and LG's more generous selection of HDMI 2.1 connectivity—but for my situation, mini LED made more sense. LG's OLED EX, however, has me excited about future OLED TVs.
"Thanks to EX Technology, OLED EX displays unlock new levels of picture accuracy and brightness to accurately deliver exquisite, realistic details and colors without any distortion – such as the reflection of sunlight on a river or each individual vein of a tree leaf," LG says.
The use of deuterium compounds is key, in that LG says they emit stronger light. For the first time, it has been able to convert hydrogen elements into stable deuterium and apply the compounds to its OLED EX display. That's apparently no easy task.
"Deuterium is twice as heavy as normal hydrogen, and only a small amount exists in the natural world – as only one atom of Deuterium is found in about 6,000 ordinary Hydrogen atoms. LG Display has worked out how to extract deuterium from water and apply it to organic light-emitting devices. When stabilized, the Deuterium compounds allow the display to emit brighter light while maintaining high efficiency for a long time," LG explains.
As for the "personalized algorithm" at play, it's based on machine learning technology and is purportedly capable of predicting the usage amount of up to 33 million OLED in an 8K resolution screen after learning individual viewing patterns.
Other details are in short supply ahead of CES, though LG's press release suggest it will launch a 65-inch model. Hopefully it plans on releasing other sizes as well, and 4K panels too (instead of limiting this to just 8K screens).