LG is rolling out a new flagship ultra short throw (UST) projector, the CineBeam HU915QE. It's a tri-channel laser projector capable of beaming images up to massive 120 inches from just 7.2 inches (18.3 centimeters) away from the wall, or if you want to scooch it even closer, it can throw a 90-inch picture from a mere 2.2 inches (5.6 centimeters) away.

"Featuring LG’s latest projection technologies, the new CineBeam projector delivers outstanding 4K picture quality from a short distance," said Seo Young-jae, senior vice president and head of the IT business unit of LG Electronics Business Solutions Company. "An excellent choice for movie lovers seeking authentically cinematic experiences at home, the HU915QE combines superb performance with convenient features, easy installation and a sophisticated, space-friendly design."
According to LG, its latest CineBeam projector is a bright performer at 3,700 ANSI Lumens. Without getting into the weeds of brightness measurements, the quick and dirty way to compare a projector's ANSI Lumens with the nits rating of a TV or monitor is to divide by 3.426. In doing so, 3,700 ANSI Lumens works out to around 1,080 nits. 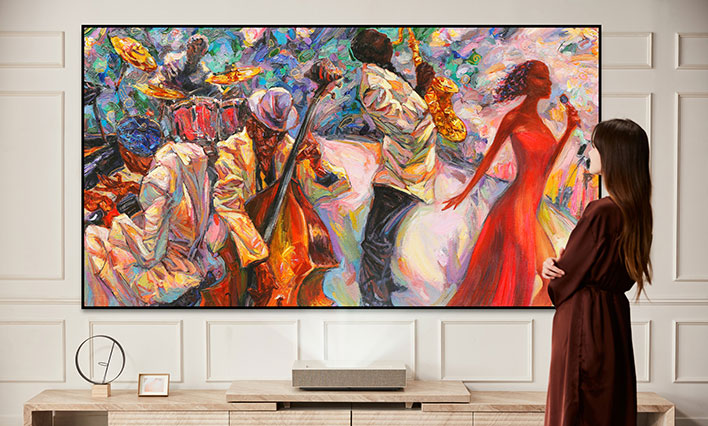 LG also touts an impressive 2,000,000:1 contrast ratio, though your viewing setup (ambient light and type of screen) will play a role in the picture quality. That said, the specs (if accurate) suggest the CineBeam HU915QE is capable of outputting a vibrant picture. This is helped in large part by its three-channel laser that employs a separate light source for each primary color (RGB).

On the topic of brightness, the projector automatically adjusts the brightness level according to the amount of ambient light it detects. It also dynamically tweaks the contrast based on the scene.
Smart features are handled by webOS, and users can wireless stream content via Apple AirPlay 2, Bluetooth, and screen mirroring. Other features include HDR support with HDR Dynamic Tone Mapping (no mention of Dolby Vision, so we assume HDR10), a 40W 2.2-channel speaker system, three HDMI ports with eARC, two USB 2.0 ports, and a rated 20,000 hours of lamp life.
As a flagship model, the CineBeam HU915QE doesn't come cheap—it's up for preorder at B&H Photo for $5,996.99.