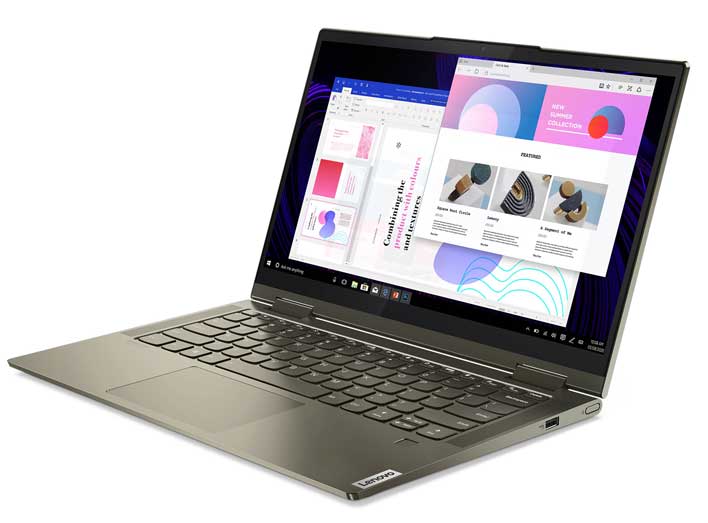 Lenovo has announced it will be updating some of its Yoga notebooks this fall. Last year's Yoga C640 and Yoga C740 get new names to match Lenovo's latest product branding. The C640 becomes the Yoga 6 while the C740 becomes the Yoga 7i 14-inch and 15-inch. Along with the new name, the machines also get new hardware and features for 2020.

Soon both Yoga 7i models will be updated with Intel's upcoming 11th generation Tiger Lake processors. Yoga 7i models also get a new flip to boot feature where opening the lid boots the system up. This feature will make it quicker and easier for computer users to get the laptop up and running for distance learning or remote working.

Lenovo fits both Yoga 7i 14 and 15 models with front-facing speakers that support Dolby Atmos for better sound quality. The front camera is designed to bump up from the bezel, and those bezels are reduced by 20% compared to previous models. Wi-Fi 6 and Bluetooth 5.0 are integrated along with larger 70 WHr batteries compared to the 60 WHr batteries of the previous model.

Both machines also feature a Thunderbolt 4 port (a new addition with Tiger Lake), Amazon Alexa preloaded, and optimized intelligent cooling systems. Color options include Deep Slate and Dark Moss. The Yoga 7i 14-inch will start at $849.99 while the Yoga 7i 15-inch starts at $799. Lenovo has announced a Yoga Slim 7i that won't be offered in North America.

Lenovo is also updating the Yoga C640, which is now called the Yoga 6. This notebook is a 13-inch computer that starts at $699.99. Hardware updates for 2020 include AMD Ryzen 4000 CPUs, a blue stain-resistant fabric-wrapped top cover, Amazon Alexa preloaded, and Wi-Fi 6.

A new self-diagnostic service that scans a computer to detect and remove spyware, malware, adware, fix network access issues, and automatically tuneup the PC called Lenovo Vantage Smart Performance Services is also launching this year. The service is expected to start at $29.99 for one year with options priced at $49.99 for two years, $59.99 for three years, and $69.99 for four years.