For the most part, desktop PCs have been trending towards smaller designs, culminating in things like Intel's diminutive Next Unit of Computing (NUC) and its even tinier Compute Stick. While not quite as compact, Lenovo's new 'ThinkCentre M75n IoT Nano Desktop' is yet another example of a space saving design with modern hardware inside.
This one is not powered by Intel, however, and instead rocks an AMD Athlon Silver 3050e processors. This is a "Dali" processor that is built on a 14-nanometer manufacturing process and based on AMD's original Zen CPU architecture. It sports 2 cores and 4 threads, with a 1.4GHz base clock and 2.8GHz max boost clock, along with 4MB of L3 cache.
It also features integrated Radeon Vega graphics with three compute units (CUs) clocked at 1,000MHz, according to the chip's product page on AMD's website.
The ThinkCentre M75n IoT is the successor to the Intel-based M90n that was released last year. It is housed the same chassis, which serves double duty as a big passive heatsink. It should have an easier time this go-round—where as the M90n featured a 15W Core i3 processor, the Athlon Silver 3050e is a 6W chip.
"It may only be the height of three stacked smartphones, yet the ThinkCentre M75n IoT Desktop is equipped with AMD Athlon™ 3000 Series mobile processors with Radeon™ Graphics. Because it's so small, it can be housed practically anywhere—for instance, mounted on a factory wall or on a shelf in the back of a store," Lenvo explains. 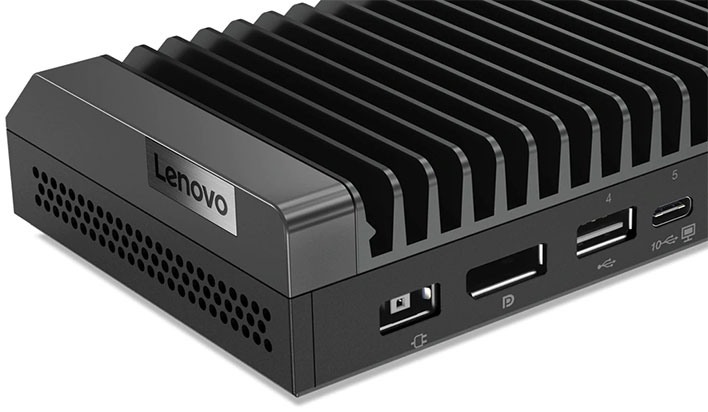 The M75n pairs the AMD chip with 4GB of DDR4-2400 RAM. There are M.2 slots for storage, and several connectivity ports, including a pair of USB 3.1 Gen 2 Type-A ports, two USB 3.1 Gen 2 Type-C ports, two serial ports, a DisplayPort connector, and an RJ45 port. And on the wireless side, the system can optionally be equipped with a Wi-Fi card.
Lenovo did not say when the M75n will be available (only that it is "coming soon") or how much it will cost. However, according to FanlessTech, which first spotted this new addition, pricing will start at $329.