Nobody likes to use a slow computer. Having to wait for applications to launch and files to load can be incredibly tedious, especially when you're in a rush to get work done. That said, nobody likes to lug around a heavy "desktop replacement" laptop either, whether it's a mobile workstation or gaming system.

Well, Lenovo's here to say "get you a girl who does both," or in this case, a laptop that offers solid performance without the hefty body weight. Enter the Lenovo Slim series, known as "Yoga Slim" outside of the US. They're exactly what it says on the tin: thin & light laptops, except without the meager performance sometimes offered by svelte mobile PCs. Once upon a time, they might have been called "ultrabooks." 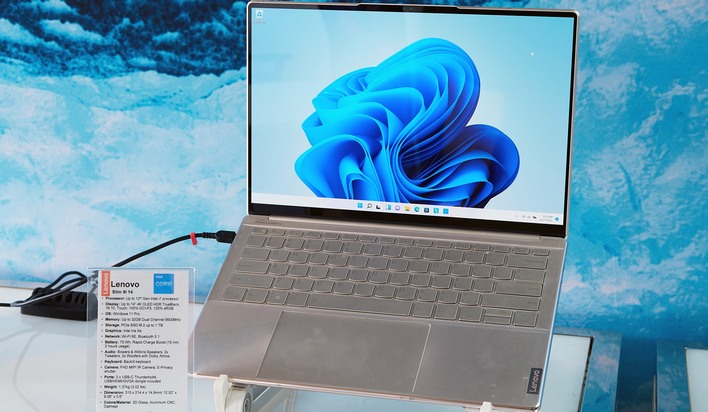 Starting from the top, we have the Lenovo Slim 9i. This is a 14" laptop with a sub-15mm-thick chassis encased in what Lenovo calls "3D glass." This is the crown jewel of the Lenovo Slim line, and it offers your choice of Core i5 or Core i7 processors from the 12th-generation "P" series. For those unaware, these fall in-between the ultra-low-power "U" processors and the full-power "H" processors, with TDP ratings of 28W.

The Slim 9i can be had with up to 32 GB of dual-channel LPDDR5 at up to a scorching 5600 MT/s. PCIe 4.0 SSD options top out at 1 TB, and graphics duties are handled by the Intel processor's potent integrated graphics. Said graphics connect to your choice of touch-capable PureSight OLEDs in either 2880×1800 or 3840×2400 resolution. The lower-resolution display supports 90 Hz refresh, and both are DisplayHDR 500 True Black certified.

Lenovo says that the 75-Whr battery can handle up to 15 hours of 1080p video playback, although it doesn't specify which model that applies to. Perhaps more impressively, a 15 minute charge can apparently prepare you for another 2 hours of usage. All three of the machine's USB Type-C ports are fully Thunderbolt 4-capable, and while there's no Ethernet connection, you do get Wi-Fi 6E and Bluetooth 5.1 as standard. 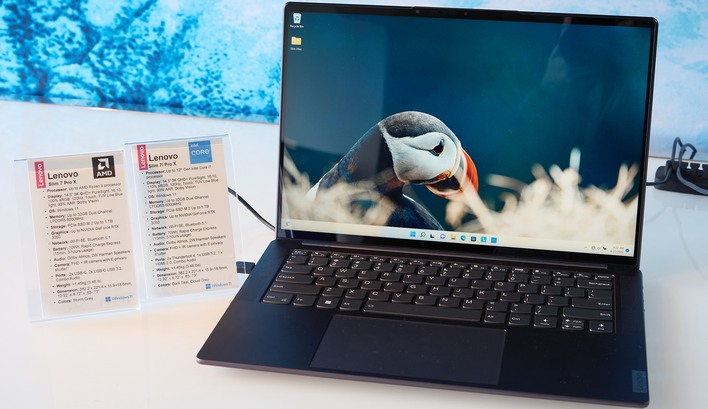 If you really need high performance including discrete graphics, then the Lenovo Slim 7 Pro X and Slim 7i Pro X have you covered. These very-slightly-larger 14.5" machines come with full-fat "H"-series processors from AMD and Intel respectively. On the AMD side, that gets you Ryzen 5, 7, and 9 models from the 6000 series with up to 8 cores, while your Intel options include 12th-gen Core i5 and i7 processors with up to 14 cores.

Whichever you choose, you get your pick of either 16GB of 32GB of LPDDR5 memory, running at 6 GT/s on the Intel machines and 6.4 GT/s on the AMD systems. Storage is the same as the Slim 9i; a single PCIe 4.0 M.2 SSD with up to 1 TB of capacity. Graphics are where it really gets interesting on the Pro X models; regardless of your CPU, you can have a GeForce GTX 1650 or a GeForce RTX 3050, either with 4GB of GDDR6 memory.

There's only a single display option: an IPS LCD in the unusual 3072×1920 resolution. You can get it with your choice of lightweight plastic, shiny glass, or glass with touch capability. It's a 120-Hz screen, and it supports NVIDIA G-Sync, too. Owing to these systems' content creation focus, Lenovo ships the screen calibrated with a delta-E value below 1.

Besides the excellent screen, another key feature that separates the Pro X models from the standard Lenovo Slim 7 family is the presence of Lenovo's "X Power" function. The company says that users will be able to tune the laptops' performance for specific workloads by selecting "X Power" profiles. 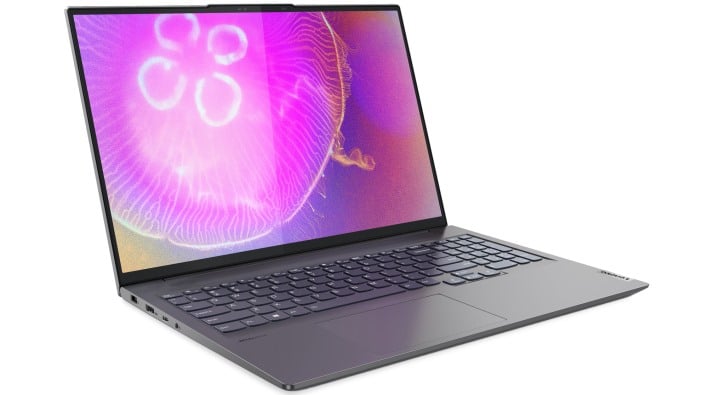 If you're not too fussed about the breadth of your laptop, you'd probably be suited just fine with the standard Lenovo Slim 7 or Slim 7i. These larger 16" models have been updated with the latest AMD Rembrandt and Intel Alder Lake CPUs, offering 45W processors from both families. Curiously, the Intel-powered 7i tops out at 16GB of memory while you can get 32GB in the AMD-based Slim 7, but both models can be had with 1TB M.2 SSDs.

These systems also offer discrete graphics, and in fact, the Ryzen-based Lenovo Slim 7 can be acquired with a GeForce RTX 3050 or RTX 3050 Ti, the fastest graphics available in the Slim family. On the other hand, the Intel-based Slim 7i offers Intel Arc A370M graphics, which we can't say much about yet. Both laptops come with 2560×1600 IPS LCDs, although the AMD model's refreshes at 165 Hz while the Intel system's is limited to 120 Hz.

Despite being rather large laptops with 16" displays, the Slim 7 and Slim 7i come in at around ⅔" (17mm) thick. However, they're pretty beefy at 4.6 lbs (2.1 kg) for the starting configuration. All that heft does buy you 2x2 802.11ax Wi-Fi and piles of external connectivity, though—to say nothing of the high performance graphics. 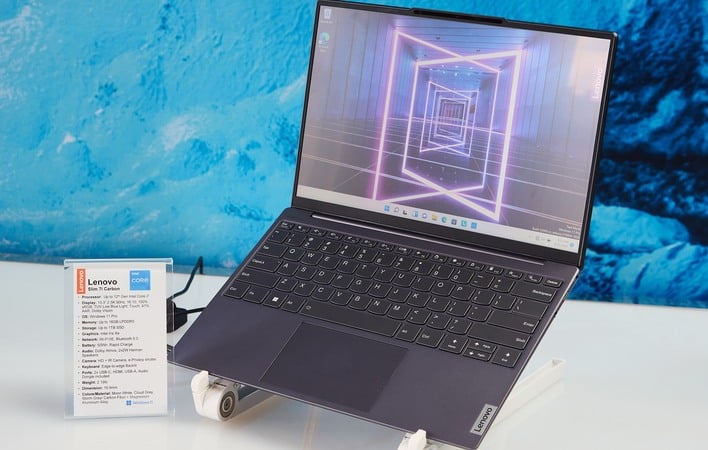 On the other end of the scale we have the Lenovo Slim 7i Carbon. This is a 13" laptop, the thinnest and lightest of the Lenovo Slim family. Despite that, it still packs your choice of 12th-generation Core i5 or i7 "P" processors. Dual-channel LPDDR5 memory comes in up to 32GB capacity, while a single PCIe M.2 SSD of up to 1TB capacity serves for storage.

The Intel processors' Iris Xe integrated graphics handle output to a 2560×1600 IPS LCD with a 90Hz refresh rate that is hardware-calibrated to a delta-E value of less than 1 out of the box; you can get it with or without touch support. Like the rest of the Slim range, the stereo speakers are Atmos-certified, and it also sports dual microphones and an HD webcam.

The main sacrifice you make on the Slim 7i Carbon is external connectivity. A pair of USB Type-C ports serves for all external connections. One of the ports is a Thunderbolt 4 jack, while the other supports USB 3.2 Gen 2. The battery naturally takes a hit too; the Carbon sports a 50-Whr unit rather than the 75 W-Hr battery of the other Slims. Lenovo says it's still good for 13.5 hours of 1080p video playback, though. 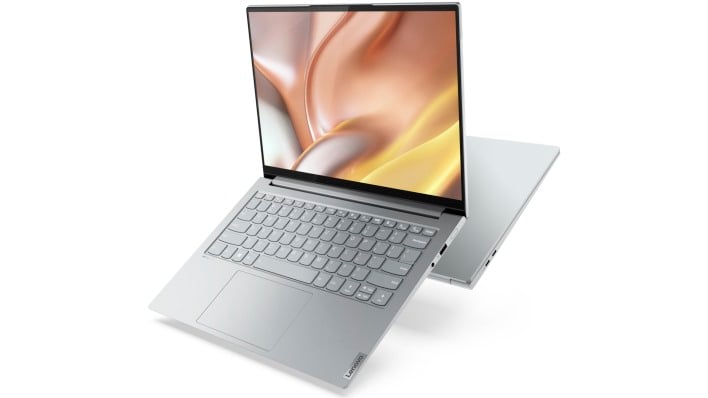 Finally, there's the bread and butter model of the Lenovo Slim lineup, the simply-titled Slim 7i. Unlike the previous Slim 7i, this model comes in 14" size class. You get your pick of 28W or 45W Intel processors, and up to 16GB of DDR5 memory at 4800 MT/s. This model also supports discrete graphics, but tops out at the GeForce RTX 2050. 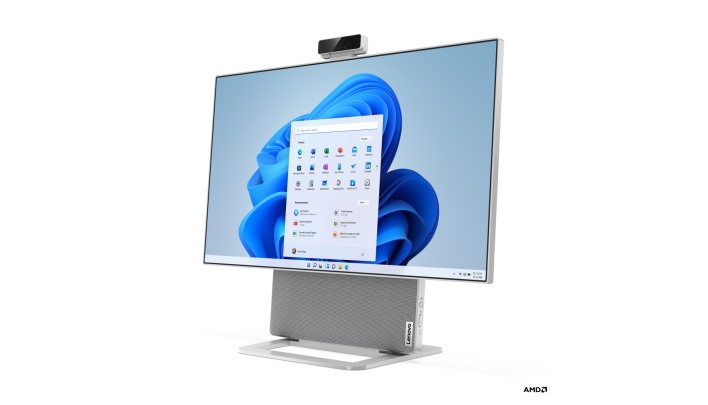 Lenovo's also launching an AIO desktop PC with today's releases: the Yoga AIO 7. This model isn't coming to the US, and that's kind of a shame because it's a cool little PC. It sports 45W Ryzen 5 and Ryzen 7 6000-series processors, up to 32GB of LPDDR5 memory, and optional Radeon RX 6600M discrete graphics.

We'd just as soon stick with the AMD processor's integrated Radeon 600 Series graphics, but the built-in screen is a 27" 4K UHD IPS LCD that can reproduce 95% of the DCI-P3 colors pace. In combination with a decent set of speakers, it could make a nice media machine. It also includes a 5M IR camera with a dual microphone array, which means it should make a capable remote work system, too.

As expected of a desktop, you get tons of connectivity, including four USB 3.2 Gen 2 ports, a pair of USB 2.0 ports, and a DisplayPort connection for a second external display. This is also the only one of the new Lenovos that has an Ethernet connection on it; again, as expected.