Another graphics card that pays homage to the past is coming to the forefront, though this time it is a pair of Radeon RX 6000 series cards from a most unlikely source...Lenovo. Be honest, would you have guessed 'Lenovo' had you not read the headline? Be that as it may, Lenovo is set to launch what we consider two of the better looking RDNA 2 cards on the market (subjective opinion, of course), under its Legion banner.
For the most part, Legion is Lenovo's gaming brand, spanning desktops, laptops, and peripherals. Pretty soon, you can add graphics cards to the mix as well. Technically, this is not Lenovo's first graphics card, though the majority of its past offerings have been focused on the professional and workstation segments, namely NVIDIA Quadro cards. You can also find a Lenovo GeForce GT 730 on Amazon.
Unless we just missed there being others, however, these will be Lenovo's first graphics cards to fly the Legion flag (alongside custom GeForce RTX 30 series cards—more on that in a moment), and its most powerful consumer cards to date. 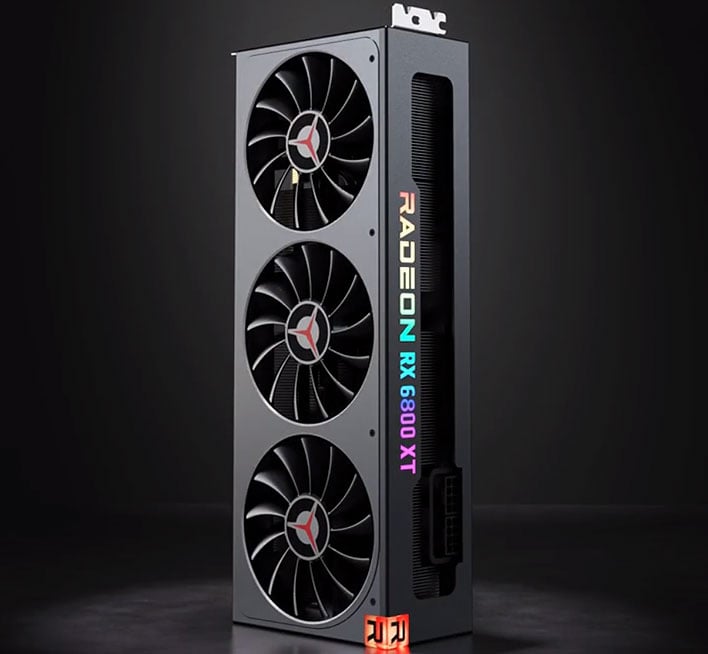 Lenovo teased its upcoming Radeon RX 6800 XT Legion Edition graphics card on Weibo, saying to "stay tuned," according to a Google translation of the forum post. The company also made clear that it intends on launching a Radeon RX 6900 XT Legion Edition graphics card as well. We assume it will look the same, though the animated GIF depicts the 6800 XT model. Other details, like exactly when these cards will come out or how much they will cost, have not been disclosed yet.
The sleek design is very much reminiscent of the Vega-powered Radeon VII from a couple of years ago. From what we can tell, Lenovo is using the same cooler, complete with the lit up Radeon logo in the corner, but in a darker gunmetal gray or matte black color scheme instead of silver. We can also make out RGB lighting on the "RADEON RX 6800 XT" label on the top of the card.
It also looks like these upcoming cards will occupy three expansion slots (or perhaps sport a 2.5-slot design, which still takes up a trio of expansion slots), making it a little bit wider than AMD's reference models. It will be interesting to see if Lenovo applies a factory overclock to these cards, and/or decides to launch them globally or just in China (fingers crossed for the former). 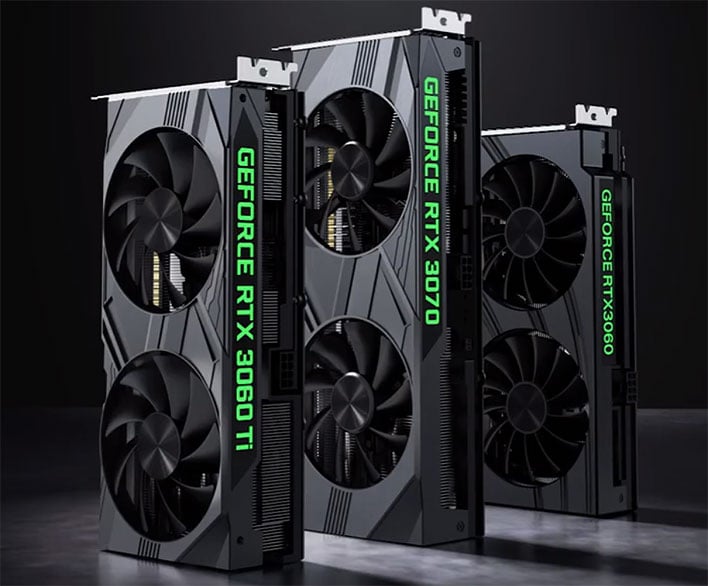 It's not just the Radeon RX 6000 series that is getting the Legion treatment, so is NVIDIA's GeForce RTX 30 series. In a separate post, Lenovo teased out an image of Legion Edition variants of the GeForce RTX 3070, GeForce RTX 3060 Ti, and GeForce RTX 3060.
These are not throwbacks designs—it looks like ASUS is the only one reviving the blower-style cooler from a much earlier era for a custom GeForce RTX 3090—and instead the cards sport a somewhat aggressive design language. Lenovo says pricing starts at 7,699 Chinese Yuan, which works out to around $1,188 in US currency—much too high for a GeForce RTX 3060.
Here's hoping pricing in the US (if any of these cards actually launch in the US, and we hope they do) end up being more reasonable.