One glance is all it takes to figure out Lenovo has ASUS in its sights with its new Legion Phone Duel 2, a high-powered gaming phone with similar specifications and features as the ROG Phone 5. What exactly constitutes a gaming phone, anyway? It starts with the flagship hardware, like Qualcomm's Snapdragon 888 SoC, but these companies have figured out it takes more than just top-end specs.
Not that either phone is lacking in premium components. The Snapdragon 888 is the best consumer chipset on tap from Qualcomm right now, with eight Kryo CPU cores (one clocked at 2.84GHz, three clocked at 2.42GHz, and four clocked at 1.8GHz) and an Adreno 660 GPU running at 840MHz. It is the chipset of choice for flagship Android phones.
The Legion Phone Duel 2 also boasts a 6.92-inch AMOLED display with a zippy 144Hz refresh rate, 720Hz touch sampling rate, 1,300 nits peak brightness, 111.1 percent coverage of the DCI-P3 color space, and HDR support, protected with Gorilla Glass 5. 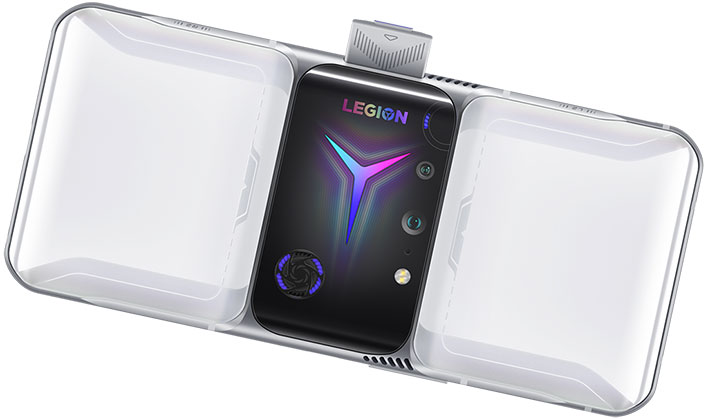 Other core specs include 12GB, 16GB, or even 18GB of LPDDR5 RAM, and 256GB and 512GB UFS 3.1 storage options. And for shooting photos, there is a 44-megapixel pop-up camera on the front with an ultra-wide 84-degree autofocus lens, and dual sensors on the back, consisting of a 64-megapixel OmniVision lens (f/1.9) and 16-megapixel wide-angle lens (f/2.2, 123-degree FoV).
All good stuff worthy of a premium phone (though we'd like to see a more robust rear camera arrangement). However, there are specific features that jettison the Legion Phone Duel 2 out of regular smartphone territory and plop it squarely into the mobile gaming sector. Like the ultrasonic shoulder buttons. 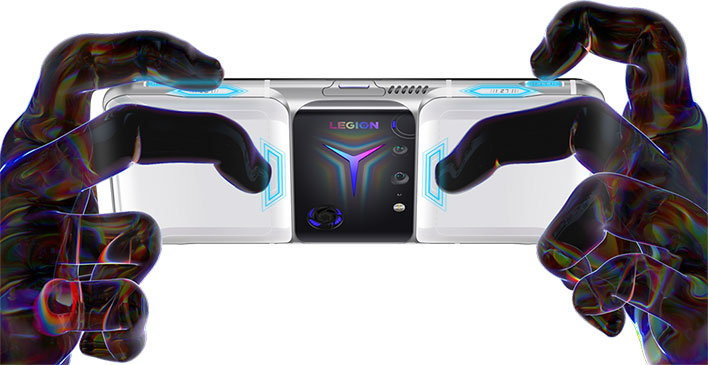 There are four ultrasonic buttons, two on each side at the top when holding the phone in landscape mode. Lenovo also equipped its newest gaming phone with a pair of capacitive touch controls on the backside, and added two in-display force touchpoints.
"The placement of the Octa-Triggers perfectly matches a gamer’s natural grip on the smartphone when held horizontally, meaning players can bind more actions, weapons, tools, or spells to get an edge in battle. Dubbed Dual HaptiX, the new dual X-axis haptic vibration linear motors enable incredibly precise touch feedback, which combined with the impressive display and supreme sound, gives gamers a total immersive sensory experience," Lenovo explains.
We have not tested the Legion Phone Duel 2, though we have come to appreciate touch controls for gaming, as they exist on the ASUS ROG Phone line—they really do make a difference when playing games on your phone.
Lenovo also borrows a page from ASUS with the active cooling, However, instead of offering cooling fans as an external attachment, the Legion Phone Duel 2 sports an integrated "Twin Turbo-Fan" cooling system, which work together to keep temps in check. This is in addition to the use of vapor chamber liquid cooling on the inside.
Overall, this looks like a promising phone. China will get first crack at it when the phone launches this month (called the Legion Phone 2 Pro in China), followed by a select markets in Asia Pacific and Europe in May. Availability in North America has not yet been determined.
As for pricing, the model with 12GB of RAM and 256GB of storage will cost €799 in Europe, while the model with 16GB of RAM and 512GB of storage will run €999, the latter of which comes with a charging dock.