Lenovo is a name associated with laptop and desktop computers, but it's expanding its offerings with a new Android-powered smartphone aimed squarely at mobile gamers. The phone is called the Legion Phone Duel and features six customized layout themes to choose from with distinctive design details, colors, and icons. One of those modes is the home mode that allows users to cast or play their games on a connected external TV or computer monitor using a wireless keyboard and mouse, or other wired accessories via a dock.

The smartphone features a virtual joystick and dual ultrasonic trigger buttons embedded along with dual vibration engines to provide feedback for more immersion in the game. The chipset under the hood is a Qualcomm Snapdragon 865+ Mobile Platform. Lenovo is also infusing the smartphone with up to 16GB of LPDDR5 RAM; the basic version has 12GB of RAM. 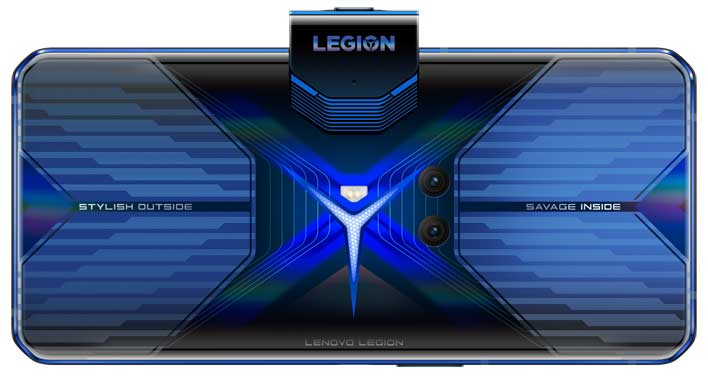 Internal storage is up to 512 GB, and the display is a 6.65-inch 2340 x 1080 AMOLED touchscreen with a 144 Hz refresh rate. The Legion Phone Duel also offers a 240 Hz touch sampling rate to help eliminate lag when gaming. Lenovo put a lot of work into the cooling capacity of the phone to keep it performing optimally. The smartphone uses dual liquid-cooling and copper tubes. It has a pair of 2500 mAh on each side for a total of 5000 mAh of battery power.

The smartphone uses 90W Turbo Power Charging that's able to charge from two cords to charge both batteries more quickly. Lenovo says the device can go from 0 to 50% power with a 10-minute charge, and a full charge takes only 30 minutes. It's unclear if charging both batteries requires two charging cables or if using two cables makes the charging faster. The smartphone also has high-end integrated audio with speakers tuned by Dirac Audio to provide 3D stereo sound.

Other features include a pop-up selfie camera that deploys in landscape mode. The smartphone weighs 8.43 ounces and is 9.9 mm thick at its thickest point. The front camera is a 20MP unit and features auto-retract drop protection. Another cool feature of the pop-up camera is that it's able to record and overlay the player's image on the screen. The rear camera is a 64MP unit.

The Legion Phone Duel will be available this month in China, where it's known as the Lenovo Legion Phone Pro. It will come to Asia Pacific, Europe, Africa, Latin America, and the Middle East later. Pricing will vary depending on the region, and there is no indication the device will come to the US.