AMD will be refreshing its family of Ryzen Pro processors for laptops, with a new generation lineup based on its Zen 3 CPU architecture. There is still no official release date, and likewise, AMD has not announced what specific SKUs will launch. However, two eventual Ryzen Pro 5000 series processors have been leaked by one of AMD's hardware partners.
Usually these kinds of early leaks come by way of benchmark database entries (Geekbench is a popular destination), screenshots posted to forums (like Weibo), and/or the usual suspects on Twitter. This time, however, Lenovo let the cat part way out of the bag by posting a pair of Ryzen Pro 5000 series SKUs on a ThinkPad P14s spec sheet. 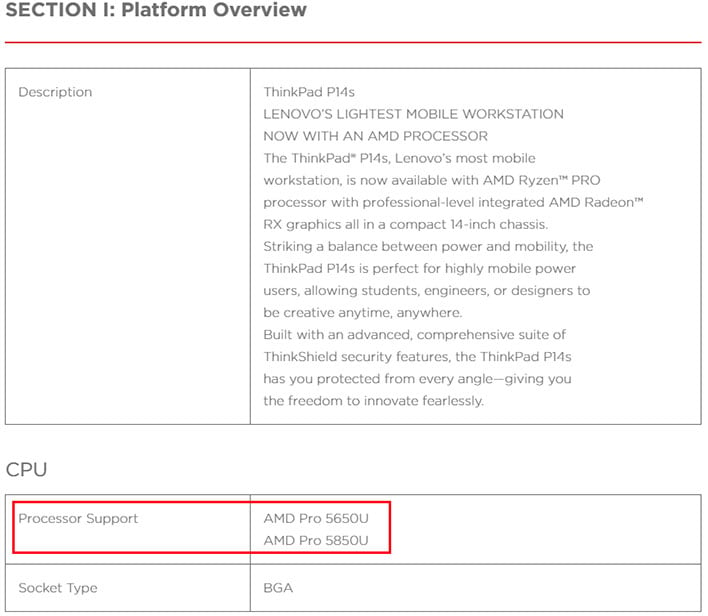 That in and of itself is not super interesting—it makes sense Lenovo will be adopting AMD's upcoming Ryzen Pro processors for its business laptops. However, the support document also seemingly confirms the specifications for both SKUs.
Have a look... 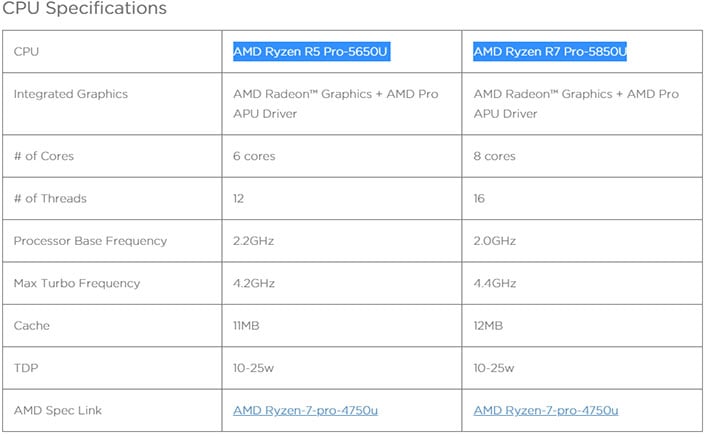 At the bottom of each spec breakdown, Lenovo links to the current-generation Ryzen 7 Pro 4750. However, the specifications listed above are indeed for the next-generation 5000 series, a conclusion we can draw because they are different than the linked CPU.
The higher end Ryzen 7 Pro 5850U wields 8 cores and 16 threads, with a 2GHZ base clock and 4.4GHz boost clock. It will arrive with 12MB of L3 cache, and a configurable TDP range of 10W-25W. The current-gen Ryzen 7 Pro 4750U is also an 8-core/16-thread chip, but is clocked slower at 1.7GHz to 4.1GHz, and has less L3 cache at 8MB.
As for the Ryzen 5 Pro 5650U, Lenovo reports it as a 6-core/12-thread processor with 2.2GHz base clock and 4.2GHz boost clock, and 11MB of L3 cache. This will replace the Ryzen 5 Pro 4560U, which offers the same number of cores and threads, but runs at 2.1GHz to 4GHz, with 8MB of L3 cache.
So faster clocks and more cache are coming to the next round of Ryzen Pro processors. That's on top of the performance and efficiency improvements Zen 3 offers over Zen 2.

It seems OEMs are eager to ship out next-gen business laptops. Just a few weeks ago, a support document over at HP highlighted a range of Ryzen Pro 5000 series processors, culminating in the Ryzen 7 5850U. That leak showed the same number of cores (and by extension, threads) and max boost frequency, but indicated it will arrive with 20MB of L3 cache instead of 12MB.
Either way, the next round of Ryzen Pro processors should be here soon, considering that AMD's hardware partners are inadvertently leaking this stuff out.