It seems as though HP is ready to infuse its business laptops with AMD's latest generation Ryzen Pro processors, just as soon as they are formally introduced. We are talking about AMD's inevitable jump to Zen 3 within its Ryzen Pro series. So far AMD has announced Zen 3 processors for mainstream desktops and laptops, but has yet to port its latest generation architecture to its Pro lineup (or to servers, via EPYC).
Ryzen Pro processors offer additional security features that can be beneficial to business users. They are essentially AMD's equivalent to Intel's vPro platform. Ryzen Pro CPUs have a dedicated security processor (AMD Secure Processor, or ASP), which acts as a hardware root of trust, and support for AMD Memory Guard, to offer full system memory encryption as an added layer of protection.
A set of manageability tools and other features are also part of the Pro platform, as well as 18 months of planned software stability and 24 months of planned availability. As to what additional features might come  to the Ryzen Pro 5000 series, we'll have to wait and see.

In the meantime, the next-gen CPUs have made some appearances on the web. A support document for an HP ZHAN 66 Pro A 14 G14 laptop points to a couple of unannounced Pro processors, those being the Ryzen Pro 7 5850 U and Ryzen Pro 5 5650U. HP left out the "Pro" tag, but those are Pro variants.
The ZHAN is a bit of mystery to us. We fired up an online chat session with an HP's sales representative, and they were unable to provide any information about the ZHAN line in general. It could be an international variant of the EliteBook, but we can't say for sure—if anyone knows, feel free to tell us in the comments section below.
In any event, the Ryzen 7 Pro 5850U also poked its head elsewhere on the web, over at UserBenchmark. Have a look... 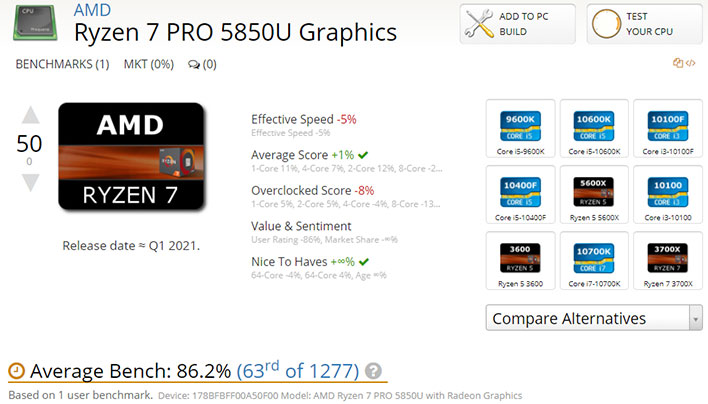 According to the benchmark listing, the Ryzen 7 Pro 5850U sports 8 cores and 16 threads, with a 1.9GHz base clock, and averaged 3.65GHz for the boost clock. For reference, the Ryzen 7 4750U is also an 8-core/16-thread processor, with a 1.7GHz base clock and 4.1GHz max boost clock. It also features 8MB of L3 cache.
The Ryzen 7 Pro 5850U will undoubtedly be a faster chip, both in specifications and resulting a jump to AMD's Zen 3 architecture. While no announcement has been made, these leaks suggest AMD is closing to lifting the curtain on its latest generation Ryzen Pro processors.