If you have ever wished you could own a robot goat that you can ride to work, your dreams may be coming true. Kawasaki recently showcased Bex, its robotic goat, that can transport cargo up to 220 pounds.

Last week at the 2022 International Robot Exhibition held in Tokyo, Kawasaki unveiled its 4-legged robot to the world. Alongside its humanoid robots, the company showed RHP Bex, a multi-legged robot that was made to resemble an Ibex. An Ibex is a species of wild goat that are typically found in Eurasia, North Africa and East Africa. They are known for their sure footing that allows them to scale and navigate up steep inclines. 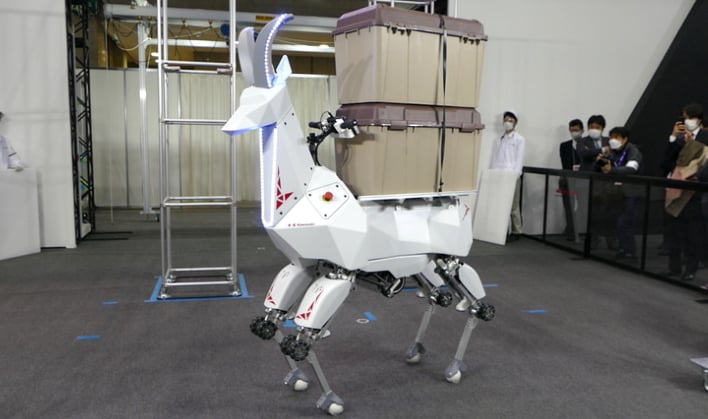 It is perhaps this ability that led to the Ibex being chosen for the design. Bex came out of the Kawasaki's Kaleido program, when engineers decided in 2015 to build a robot that could move quickly across level ground, but still be able to navigate tricky terrain. If you happen to weigh 220 pounds (100 kg) or less, you can choose to jump onto the metal goat for a ride.

If you are into RGB, then you will be delighted to know that Bex's horns will light up (fingers crossed you can match it to your PC, keyboard, mouse, etc.). It is also able to kneel down and utilize wheels located at the knee joints and "hooves", while another wheel is located on its underside. While in this position, a person can mount the robotic goat and then have it stand back up and take you for a ride (as seen in the video below).

As for possible uses for Bex, the demonstration included it helping with harvesting crops in a field with rough terrain, and could also be used to help transport luggage at construction sites and inspections plants.

The robot control system "V-Sido" is used to generate the leg walking motion, and is operated in real-time with human instructions, such as a steering wheel by the passenger or by remote control using a joystick. V-Sido is a product of Asratec Co. Ltd.

Whether or not Bex will become an attraction at local zoos, or county fairs, is unknown. However, the use cases for such a robot can be found across many industries and applications. In the meantime, we will be sitting here envisioning the day we can get our goat robot running, and heading out on the highway (or in the backyard).