One of Elon Musk's first decrees after acquiring Twitter was to restore many controversial accounts that were suspended under the old regime. That included Kanye West, or Ye as he now prefers, who was suspended just before Musk's acquisition for posting antisemitic content. However, it didn't take long for West to become more trouble than he was worth—the rapper's account has again been suspended following a blatantly racist outburst that was too much even for Musk's "free speech" social network.

West has been escalating his antisemitic attacks in recent weeks, but he's kept it mostly off of Twitter. Earlier in the day on Thursday, he appeared on Alex Jones' Infowars broadcast. While Jones is no stranger to far-right ideology, a masked West shocked even him as Ye praised Hitler and Nazi ideology live on the internet. It didn't take long for West's latest tirade to leak into his Twitter posts. West further inflamed tensions when he posted a Star of David symbol with a swastika.

This left Musk at an impasse—he promised to allow any legal speech on the platform, but West's behavior was clearly over the line for even the right-wing segment of the site. In the pre-Musk era, Twitter had a large moderation team that would weed out racially insensitive content, but Musk's layoffs reduced the workforce by half, and then more employees left after his Twitter 2.0 ultimatum. Musk also slashed the number of contractors, many of whom were responsible for moderating the site. 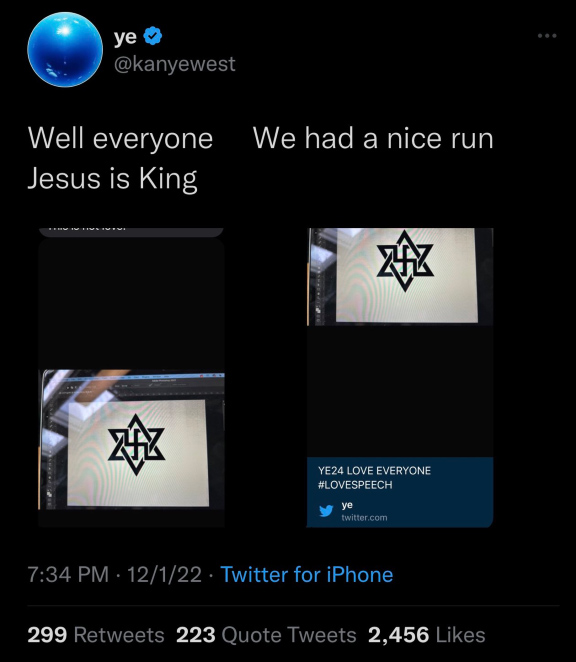 Twitter ultimately suspended West's account again late in the day, an action that Musk justified with the site's policy against "incitement to violence." Is posting antisemitic content the same as calling for violence? You could probably make that argument, but regardless, this was perhaps a sign that Musk is learning day by day why the old Twitter had so many rules about content.

Before his account was disabled, West took a swipe at Musk, who has called the rapper a friend on several occasions. He posted a screenshot of a text conversation with Musk in which the Twitter owner told him he's gone too far. To which West responded "Who made you the judge" and posted an unflattering photo of a shirtless Elon Musk.