A new vehicle is heading to your garage for some ball blasting fun for fans of the hugely popular game Rocket League. Starting tomorrow, July 29th, James Bond's iconic Aston Martin DB5 will be available in the game for a limited time.

How limited? Well, you'll have until August 4th to grab the car, which is part of a multi-year licensing agreement between MGM and Rocket League developer Psyonix. The DB5 won't come free; however, it'll cost $10 of your hard-earned cash (around 1,100 credits) to play it in-game.

007's DB5 made its first appearance in Goldfinger and has subsequently been featured sporadically throughout the series, most prominently in the recent Daniel Craig outings. The DB5 will feature a Silver Birch Paint Finish, unique engine audio, signature DB5 wire wheels, and a Reel Life Decal.

Unfortunately, you won't find machines guns in the parking lights, a bulletproof shield behind the rear glass, an ejector seat, tire slashers, or the oil slick sprayer. But you will find an Octane hitbox and rocket boost for your arena antics. 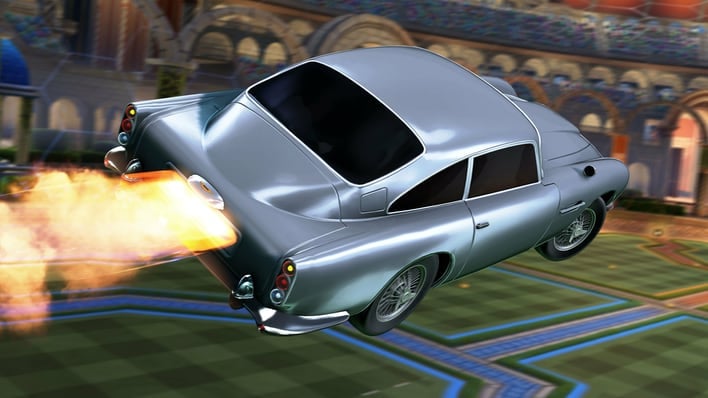 The 007 tie-in shouldn't come as a surprise as the next entry in the long-running series is No Time to Die. The movie was supposed to come out in 2020 but was delayed multiple times due to the COVID-19 pandemic. However, it is now scheduled to hit theaters on October 8th in the United States. No Time to Die is likely to be the last film helmed by Daniel Craig, who first stepped into James Bond's shoes in 2006 with Casino Royale.