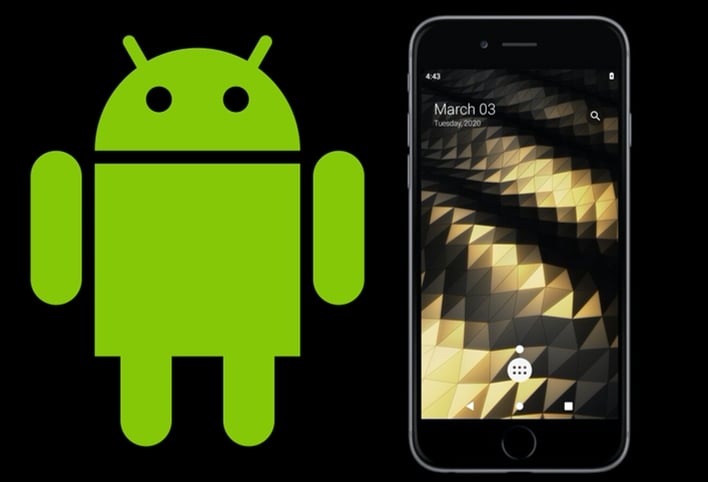 Apple is notorious for not letting other kids get near their sandbox. Their restrictions have frustrated users who want to take greater control over their device, but there now appears a way for users to run the Android OS on their iPhones. Cybersecurity startup Corellium recently found a way to exploit the checkra1n jailbreak to install Android on older iOS devices.
Corellium launched “Project Sandcastle” to “provide an opportunity to create something new from the limitless bounds of your imagination.” Users can download a beta that will allow them to install the Android OS on a iPhone 7, iPhone 7 Plus, or iPod Touch. Corellium promises to add more devices, but it is unlikely that this particular exploit will be effective on newer iOS devices. Project Sandcastle relies on the checkra1n jailbreak to bypass Apple’s restrictions. This jailbreak is unable to work on the iPhone 11 or other recent models, however future exploits may expand this possibility.
Project Sandcastle does have a few other limitations. Users will be able to install Android 10, but not take advantage of all it has to offer. For example, users will not be able to download apps from Google Play or use other features like their camera. It is important to note that jailbroken devices are not always particularly secure. It is also not illegal to jailbreak your device in the United States, but it is unlikely that your device will still be covered by its warranty.

Corellium argues that if you purchase an iPhone, you own the device in its entirety. They insist that Apple should not be able to restrict your ability to install a different OS or otherwise alter your device. They also hope that Project Sandcastle will help to “push mobile research forward” and they are eager to see how the community uses the project.
Corellium is currently being sued by Apple for a past project. Apple insists that Corellium has previously violated copyright laws by selling ways to create virtual Apple devices. Corellium argues that they are selling these virtual devices to security researchers, but Apple contends that Corellium is simply profiting off of copyright infringement and Apple’s vulnerabilities. Apple is currently seeking an injunction and is demanding cash compensation and the destruction of all related products.