The largest internet service providers (ISPs) in the United States defrauded the public by engaging in a secret campaign to derail net neutrality rules, New York Attorney General Letitia James stated in a series of Twitter posts. This secretive campaign resulted in the Federal Communications Commission (FCC) receiving millions of bogus comments to a proposal to repeal net neutrality regulations that existed at the time, a multi-year investigation has determined.
A series of net neutrality regulations were put into place during the Obama administration, but were later rolled back during the Trump administration, during which time former Verizon attorney Ajit Pai was chairman of the FCC. Pai spearheaded the rollback of rules designed to ensure ISPs treat all internet traffic equally, thereby protecting consumers from potential abuses (like throttling traffic to certain sites and services).
In fairness, the internet didn't crumble when net neutrality regulations were rolled back, and some of the worst fears of life on the web without certain key regulations have not come to fruition. Be that as it may, the illegal meddling of government policies by the largest broadband providers in the nation, if it happened the way the investigation states, is disturbing, disappointing, and infuriating.
The grizzly details are outlined in a report titled, "How U.S. Companies & Partisans Hack Democracy to Undermine Your Voice," assembled by the Bureau of Internet and Technology, and the Research and Analytics Department. 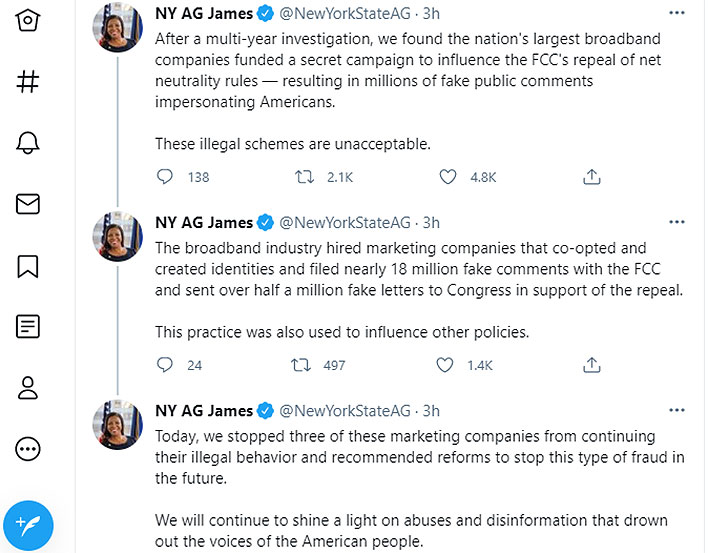 What this primarily has to do with is a commenting period in relation to a draft proposal by Pai and company to repeal net neutrality rules. The proposal was made public, and citizens then had an opportunity to read and comment on the draft. In theory, millions of voices could be heard, and the FCC would take the opinion of the public at large into consideration.
That's perhaps an idealistic view of how things should work, but what shouldn't happen is for companies to game the process. The report begins by describing a comment the FCC received from Kenneth Langsam, who "urged" the agency to eliminate net neutrality rules. The problem? Langsam had died seven years before that comment was submitted.
"The comment was fabricated and his identify stolen," the report states.
It only gets worse from there. According to the report, the nation's biggest ISPs banded together to fund a campaign to general millions of comments for the FCC's proposal in 2017. The ISPs who participated have a combined 65 million subscribers among them, and a market value of half a trillion dollars.
"The effort was intended to create the appearance of widespread grassroots opposition to existing net neutrality rules, which... would help provide 'cover' for the FCC’s proposed repeal. The broadband industry hid its role in the campaign by recruiting anti-regulation advocacy groups, unrelated to the industry, to serve as the campaign’s public face. Budget documents show that, in all, the broadband industry players that funded the campaign spent $4.2 million generating and submitting more than 8.5 million fake comments to the FCC," the report states.
In total, the investigation found that 18 million of the 22 million comments were faked in some way. And out of those 18 million, nearly half came from a co-registration scheme, in which broadband outfits hired companies to offer consumers rewards, like gift cards and sweepstakes entries, to get consumers to join a grassroots campaign. They then used the information collected to submit comments to the FCC, without those people's knowledge.
"The broadband industry could not, in fact, rely on grassroots support for its campaign because the public overwhelmingly supported robust net neutrality rules.1 So the broadband industry tried to manufacture support for repeal by hiring companies to generate comments for a fee," the report states.
Three of the companies in the scheme have already settled with the attorney general, for a combined $4 million.
For more salacious details, give the full report (PDF) a read—it checks in at nearly 40 pages.