It seems the chip shortage has claimed yet another victim. Canon has been sending out emails to its customers, letting them know that changes are coming to its ink and toner cartridges for multifunction printers (MFP).

It wasn't too long ago that Canon made headlines concerning its printer ink and toner. Back in October of last year, the company was slapped with a lawsuit by David Leacraft, of New York. Leacraft claimed that he was misguided by the advertising when he purchased a Canon Pixma MG2522 all-in-one printer and found the printer's scanning function was disabled once the printer ink ran too low. He stated that this caused the device to cease being a multi-function device and therefore was deceiving. Now it seems that the chip shortage has ironically caught up to the company as well in regard to its toner cartridges. 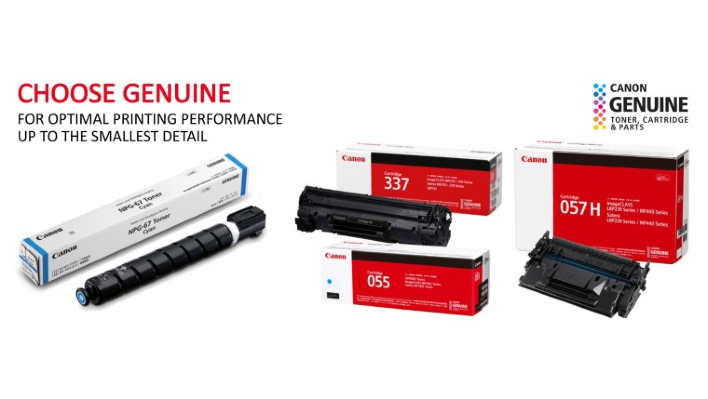 Canon's correspondence claims that the global shortage of semiconductor components has affected its ability to source certain electronic components, namely the chip that communicates information about toner level, and confirms that the toner is a genuine Canon product. Customers have also begun speaking out about the email from Canon on social media, like Mario W. on Twitter. 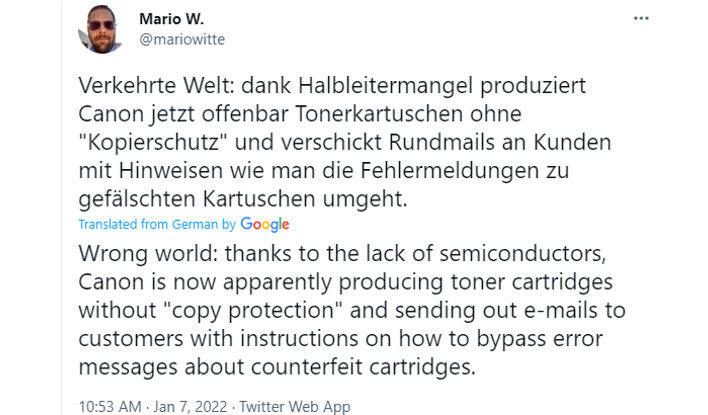 On Canon's website, the company says that it has come up with a temporary solution to the issue. It has started to manufacture chip-less toner cartridges, understanding that this solution will cause some "inevitable, yet minor, changes" to its customer's experience. Those changes may include certain ancillary functions not performing properly, such as detecting remaining toner level. In an attempt to minimize customers running out of ink due to the missing 'low toner' alert, Canon states customers can request urgent toner supply. The lack of a chip should not, however, affect the process or quality of printing.

As pointed out in Mario W.'s tweet, the email includes how to workaround the inevitable error message one will encounter when trying to use the new toner cartridges. The error message is caused due to the lack of the DRM chip that would typically tell the printer that the cartridge being utilized is in fact a genuine Canon product. This workaround is also listed on Canon's website, in case anyone did not get the memo directly. There is also a section that speaks to the toner level not showing properly. Basically, the level will show 100% until it reaches 0%, and at that point you are to simply replace the cartridge.

Canon says that it expects to start supplying the chip-less cartridges in February of this year. It also states that this is a temporary solution and that it expects to return to shipping chipped cartridges at some point in the future. Until then, customers will have to face yet another annoyance thanks to the chip shortage.