Update 11/12/21: After topping $100,000 in bids, the modded iPhone X with an unsanctioned USB Type-C port ended up actually selling for a bit less, but still for a immense sum—$86,001, to a bidder/buyer who was presumably willing to pay. It attracted over 100 bids (though most likely not from 100 different people).
What this ultimately means is up for interpretation. Is a modded iPhone, even one as intricately wired as this one, really worth the winning bid price? And will this motivate Apple to fast-track implementing USB Type-C connectivity on its future iPhone designs, as it has already done with its iPad? We can only wait and see (and hope that whatever iPhone does finally embrace USB Type-C will cost significantly less).

Original story: Apple iPhone users have dreamed of having a USB-C port in place of the Lightning port for quite a while. The wait for that to be a reality will be over for one lucky person thanks to a robotics student and his modded iPhone X listed on eBay.

With each new generation of iPhone there is always one nagging question, "Will this be the one to have USB-C?" And with each new generation that answer has been a big fat NOPE from Cook and the gang. Apple has always been about keeping its technology and iOS software in house and that includes its proprietary Lightning port. Apple said in early 2020 that to do away with the Lightning port would create waste. Although Apple has added USB-C connectivity to some of its iPad models, including the new iPad mini, so go figure
One person who is among those who have been dreaming of when Apple will adopt the USB-C port when it comes to the iPhone took it upon himself to solve the issue. Swedish robotics student at the Swiss Federal Institute of Technology, Ken Pllonel, set out on a modding journey to turn his iPhone X's Lightning port into a functional USB-C port. And he was successful in doing so as the newly modded port works for both charging and data transfer.

Pillonel says the main idea behind his project was "to use a USB-C to Lightning, convert the Type C male end of the cable to a female port and then make the whole thing fit inside the iPhone." After he studied the documentation of the Type-C specification he was able to find a way to make the reverse-engineering work. He recognized early on that the main issue would be making all the reverse-engineered technology fit inside the iPhone without losing its functionality, as well as potential loss in signal integrity. 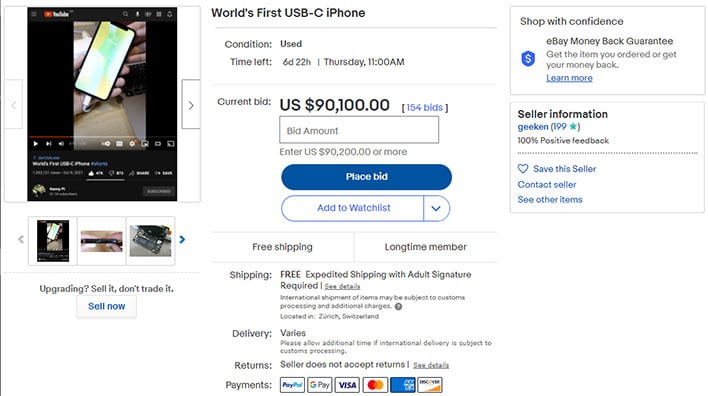 
After months of testing and maneuvering Pillonel was finally successful in achieving his ultimate goal, which was a functional USB-C port on his beloved iPhone. Once he was done with all the modding, he then decided to place the extremely unique iPhone on eBay—the world's first USB-C iPhone, as it were—and it has already received massive interest in the early going. At the time of this writing the listing had a bid over $90K, and the auction doesn't close for another six days!

It will be very interesting to see how high the bids end up going on eBay for this one of a kind iPhone. Maybe Apple will take notice and rethink its stance on keeping the Lightning port on its next generation of iPhones. One can dream.