For over 60 years, humans have been launching objects into space for varying purposes. Once a satellite becomes obsolete or no longer needed, it aimlessly orbits the Earth and can become a hazard for other space objects. Thus, it is a surprise that the International Space Station has not had a massive collision yet, but small impacts still happen from time to time. This now includes a recent space junk strike on the robotic arm of the ISS.

There are over 23,000 pieces of space debris in space, the size of a softball or larger, that are tracked 24/7 to predict potential collisions. There is also a plethora of smaller objects, from "rock or dust particles to flecks of paint from satellites," that are much too small to be tracked. No matter the size, all these objects could pose a danger to the ISS crew and other space-faring objects, so they must be kept under watch as best as possible, but that does not always work out. 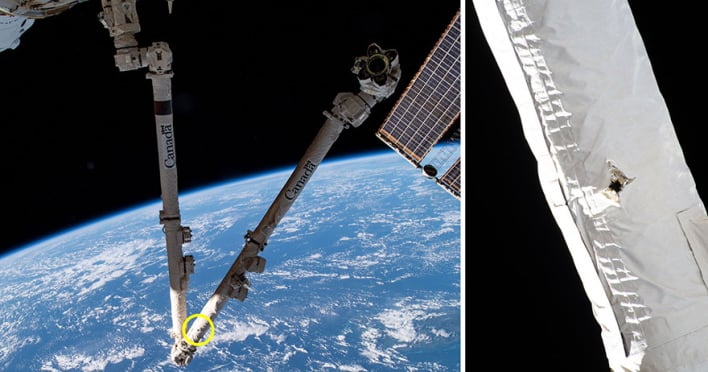 During a recent routine inspection on May 12th, robot operators noticed a small hole in the space stations' 20-year-old Canadarm2 from the Canadian Space Agency. The CSA reports that "Despite the impact, results of the ongoing analysis indicate that the arm's performance remains unaffected." As such, the Canadarm2 will continue to "conduct its planned operations, including hoisting Dextre," a repair robot, "into position to replace a faulty power switchbox (Remote Power Control Module)."


At present, it is unknown how big the hole is, but if operations are continuing, then it should not be a big deal. However, NASA and the CSA likely want to fix this as soon as possible as there could be unknown underlying effects from this. Perhaps we will find out more when NASA and CSA complete the analysis of the situation, so keep an eye on HotHardware for updates.

(Damage Image Courtesy of the CSA)