Intel Bets Big On Vietnam To Alleviate The Chip Shortage

There is no definitive timeline on when precisely the chip shortage will end, only that it won't last forever. Huge investments (billions of dollars) are being made into factory upgrades and expansions, to hopefully avoid another situation like this one from playing out in the future. In the meantime, the situation is certainly improving, and Intel is giving credit to "contributions from Vietnam" for "alleviating constraints in the global semiconductor supply chain."
Some context is needed here. Intel so far has invested $1.5 billion into Intel Products Vietnam (IPV), its largest assembly and test factory among its sprawling global manufacturing network. The site is home to 2,800 employees, and by the end of 2021, it had shipped more than 3 billion units to customers around the world.
Regarding the chip shortage, surging demand for processors, computers, and various electronics has strained the supply chain with what Intel deems as "unprecedented" disruptions. And in particular, it's been a challenge to supply enough Ajinomoto build-up film (ABF) substrate, which is a foundational piece of nearly every advanced processor (both CPUs and GPUs).
ABF is a key part of a semiconductor's package, as it both protects the chip and forms electrical connections between the processor and circuit board. It's a thin strip of plastic composed of 10 layers of fiberglass, each of which is linked by a network of metal interconnects.
A key part of infusing ABF is the use of capacitors to reduce noise and impedance, and maintain a steady voltage to the chip. For years Intel attached certain capacitors to one side of the substrate, and then relied on substrate suppliers to attach them on the other side. Not anymore, though. 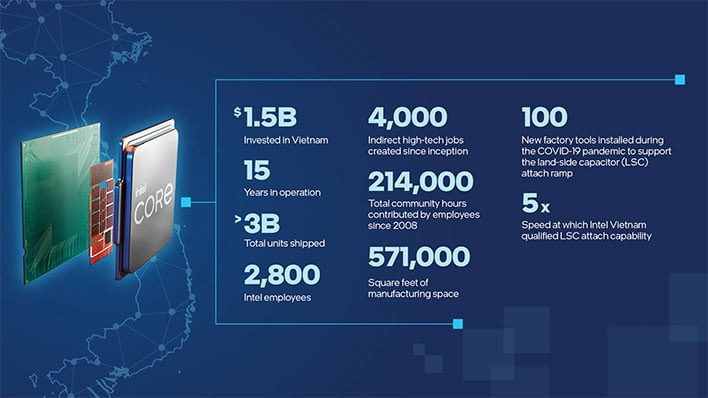 Starting in May of last year, Intel's Vietnam Assembly and Test (VNAT) factory began converting floor space to enable attaching capacitors to both sides of the substrate in-house. The site also purchased additional tools and modified existing ones, so that it could keep up with demand.
"This is the ultimate demonstration of why integrated manufacturing is a benefit to Intel and our customers," said Kim Huat Ooi, vice president and general manager of Intel Products Vietnam. "By bringing this capability in-house, we are able to complete chip assembly more than 80% faster, while at the same time freeing up the substrate suppliers who are constrained on capacity."
Kim says this is scalable manufacturing process, and just as importantly, claims the quality is the same as that of Intel's substrate suppliers. As such, Intel intends to scale capacity to enable this on a broader range of products.

Intel is obviously tooting its own horn here with this announcement, but being able to complete chip assembly 80% faster and free up substrate suppliers at the same time is potentially a big deal, especially as Intel extends this effort into more products.