President Joe Biden is scheduled to attend the groundbreaking ceremony for Intel's Ohio semiconductor facilities on September 9, 2022. The White House made the announcement Thursday as Intel plans on getting started on its two fabs that are scheduled to be open by 2025.

Intel planned on breaking ground this year for its two fabs, regardless of the outcome of the CHIPS Act which recently was signed by President Biden. The tech company stated before the bill passed through Congress, "the scope and pace of Intel's expansion in Ohio ... will depend heavily on funding from the CHIPS Act." The fact that the CHIPS Act has been signed into law will give the groundbreaking ceremony more meaning, as Intel will have the funding needed to move the process along in a timelier manner.

"The President will deliver remarks on rebuilding American manufacturing through the CHIPS and Science Act and the Bipartisan Infrastructure Law at the groundbreaking of the new Intel semiconductor manufacturing facility," a White House Advisory stated. 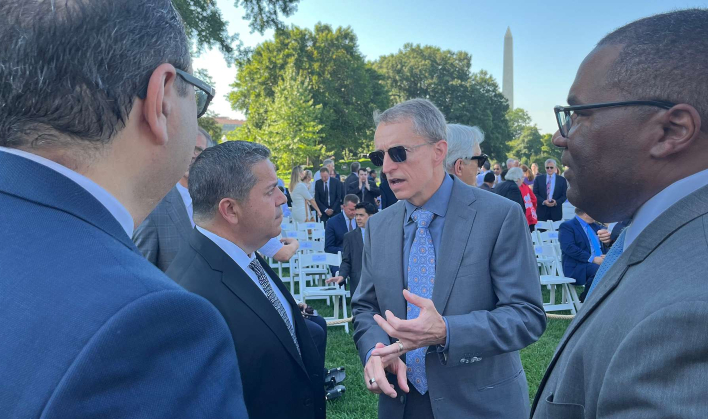 The total investment for the two fabs could top $100 billion over the decade with six additional fabs possible, according to Intel CEO Pat Gelsinger. It marks Ohio's largest ever private economic development project. The two fabs aim to employ 3,000 employees with an average salary of approximately $135,000. During the construction phase, it is expected to create 7,000 construction workers jobs as well. This should provide a huge economic boost to those in Licking County, Ohio, and surrounding areas.

The pandemic highlighted the need for more domestic semiconductor manufacturing. This is in large part due to the shift of production to overseas since the early 90's. The U.S. share shrank from 37% in 1990, to a mere 12% this year. The Semiconductor Industry Association said that the shortages could become a potential risk if not addressed.

Ohio was able to win the bidding for the fabs by offering Intel about $2 billion in incentives, which includes a 30-year tax break. In turn, Intel has outlined $150 million in educational funding which will be focused on growing the semiconductor industry regionally and nationally.