It looks like Intel is coming out with another high-powered Next Unit of Computing (NUC) device, one that will pack a meaty 14-core/20-thread Alder processor and a discrete Arc A770M GPU from the top of its mobile stack into a compact package. The Serpent Canyon NUC, as it's called, is a follow-up to the Phantom Canyon NUC that came out last year.
Intel's NUC family has grown and taken different shapes and sizes over the years. What started offer as an ultra-compact mini PC has branched into small form factor (SFF) territory. Not all are created equal, though. The NUC 11 Extreme (Beast Canyon) and NUC 12 Extreme (Dragon Canyon) we reviewed both fell squarely into mini PC territory with boxier and modular designs built around Intel's Compute Element.

In contrast, the Phanton Canyon NUC 11 is slimmer and more compact overall, with mobile components inside. Specifically, an 11th Gen Core processor based on Tiger Lake paired up with an NVIDIA GeForce RTX 2060 GPU. The leaked Serpent Canyon NUC looks to maintain a similar profile while upgrading the internals to current-gen hardware.
A user on the Baidu forums posted a handful of pictures and specifications. According to the post, Intel's highest-end configuration will feature a 12th Gen Core i7-12700H processor, which is comprised of six P-cores clocked at up to 4.7GHz, eight E-cores clocked at up to 3.5GHz, and 24MB of L3 cache. 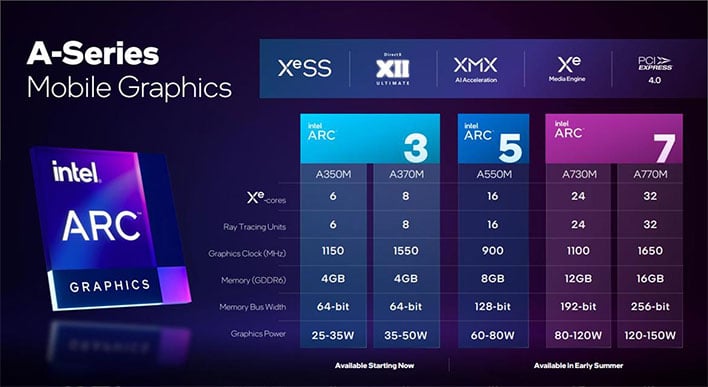 On the GPU side, Intel is switching from NVIDIA graphics to its own newly minted discrete GPUs, culminating in the Arc A770M. As noted in Intel's slide above, its initial mobile launch comprises five GPUs across three performance tiers: Arc 3, Arc 5, and Arc 7. The A770M is the burliest of the bunch with 32 Xe cores, 32 ray tracing units, a 1,650MHz graphics lock, and 16GB of GDDR6 tied to a 256-bit memory bus.
There's no mention of system RAM (we imagine at least 16GB of DDR4 or DDR5) or storage (NVMe SSD, undoubtedly). But the poster did divulge details about the front and rear I/O arrangement.

On the front, users will have access to an SDXC card slot supporting UHS-II, a Thunderbolt 4 port, a 3.5mm audio port, and a USB 3.2 Type-A port. Then on the rear, there are four more USB 3.2 Type-A ports, an Intel 2.5G LAN port, another Thunderbolt 4 port, another 3.5mm audio jack, an HDMI 2.1 output, and two DisplayPort 2.0 connectors.
There's no mention of price or when this will launch. But looking at the specifications alone, the Serpent Canyon NUC looks like an intriguing upgrade (depending of course on how the A770M fares for gaming).