During last year's Intel InnovatiON event, Intel CEO Pat Gelsinger boldly declared the chip maker would aggressively pursue Moore's Law "until the periodic table is exhausted." Then during yesterday's ribbon cutting ceremony in Oregon, Gelsinger doubled down on the claim, while also reiterating that the Intel 18A node remains ahead of schedule by half a year.
Moore's Law is a simple observation that the number of transistors in a microchip will double every two years. Gelsinger notes "Intel would not be Intel without Gordon Moore," hence why yesterday's ceremony also included the renaming of it's cutting edge development chip fab in Oregon from Ronler Acres to Gordon Moore Park at Ronler Acres.

Gelsinger credits Moore's observation with setting the pace for innovation in the semiconductor industry, and fittingly, Intel is moving up the manufacturing timeline for its Intel 18A node to the second half of 2024 instead of 2025 as originally planned. 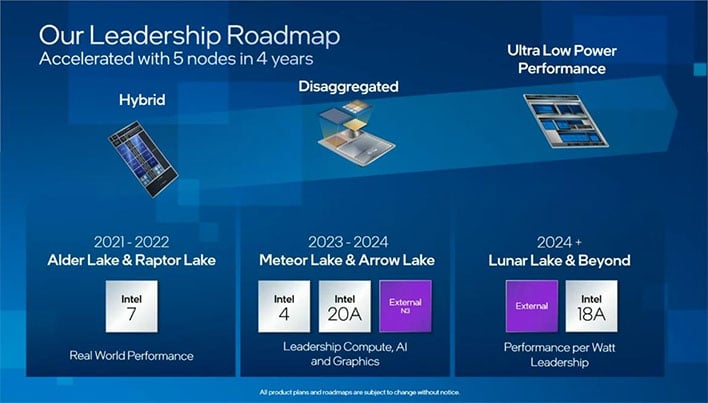 Intel 18A will be Intel's second foray in the so-called angstrom era of chip manufacturing, and the second node to employ RibbonFET and PowerVia technologies. The first is Intel 20A, which will underpin Intel's 15th Gen Core Arrow Lake processors that succeed Meteor Lake.
It all boils down to an accelerated chip development model intended to regain process leadership. Intel stumbled a bit getting to 10nm, and that opened the door for AMD and TSMC to leap ahead in some aspects (there's more to semiconductors and chip tech than the labeled node size).
Gelsinger is confident Intel is back on track and, just as importantly, on a pace that will put and keep AMD in the rearview mirror. All told, Intel is on pace to deliver five nodes in four years (Intel 7, Intel 4, Intel 3, Intel 20A, and Intel 18A). To achieve this, Intel has multiple teams working simultaneously on different architectures and fabrication processes. And of course there are the billions of dollars Intel is investing in chip fabrication sites, both new and old.
Time will tell if Intel's R&D teams can maintain this aggressive pace through the current roadmap and beyond. If they can, the CPU wars could intensify like we haven't seen in a long while.