For anyone who participated in Intel's Xe HPG Scavenger Hunt, the first verification email has been sent out. The contest ran from last October until the end of January 2022, and will be rewarding the top 300 participants with Intel Arc GPUs once they launch later this year.

Intel gave PC enthusiasts a glimmer of hope last year when it announced that it would be giving people an opportunity to win one of 300 Intel Arc GPUs. In a market where finding a GPU at MSRP (or one at all) seems impossible, the opportunity to score a new GPU was a welcome one. Not to mention it would be free if they happened to end up in the top 300.

The 300 free GPUs were not the only thing people could win. If you ended up outside of the top 300, you still had a chance at winning a coupon worth either $100 or $50 off an Intel Arc Alchemist GPU after launch. In total the contest had a prize pool of $430,000 worth of prizes up for grabs. That is definitely nothing to sneeze at.


While the contest itself is over, the verification process of winners has just begun. The first email for those who participated was sent out yesterday by Cafelli Contests. If you did participate in the hunt, and answered at least one question, you should have received an email.
Be sure to check all your folders in the email you signed up with (including the Spam folder). It could be easy to overlook, because it was sent by contests at cafelli dot com. It may also just say "Cafelli Contests" as the sender. Another thing to take note of is that this email is not saying you have officially won anything yet. You must still meet all the eligibility requirements, such as living in an eligible country, and go through the rest of the verification process before being deemed an official winner. 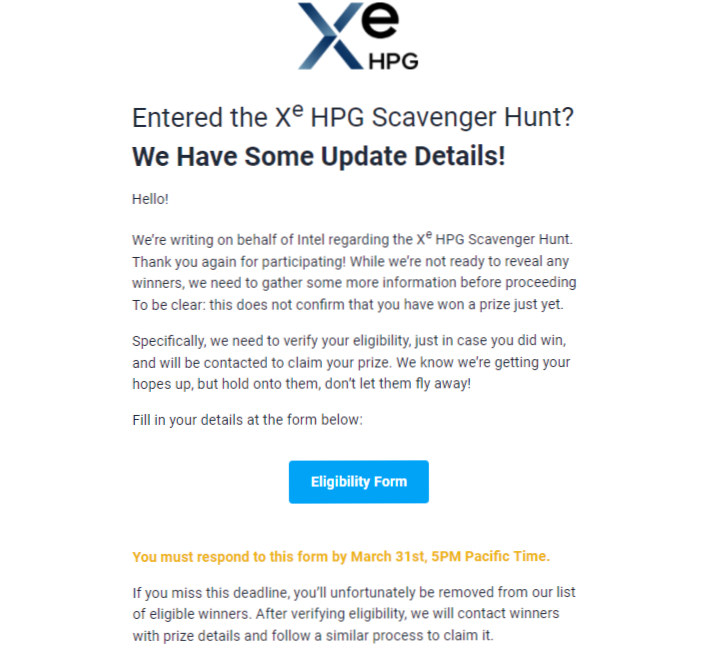 There has been some concerned expressed from Russian participants of the contest, about being able to receive what they won due to the ongoing crisis between Ukraine and Russia. It is impossible to know if the current situation between the two countries will still have an impact once the Arc GPUs are finally shipped. Intel has said it plans on releasing the desktop GPUs sometime in Q2, so there is time for things to change. However, Intel released a statement on the situation yesterday stating that it has ceased shipping to customers in Russia and Ukraine at this time.
There is a possibility that the stoppage in shipping from Intel could impact those who won a GPU, but there is a lot that can happen to change that before GPUs begin shipping to winners. Ukraine was not a country that was eligible to participate in the contest. Fingers crossed that those from Russia who were lucky enough to finish in the top 300 will be able to receive their free Arc GPU when they are finally shipped to winners.

If you participated and did not receive an email, you can reach out to Cafelli to see about why. You will need to visit Cafelli online via this link, and then fill out the form and submit your request. There are a few reasons why you may not have received an email, the most common being you made an error when initially submitting your email address at the beginning of the contest.

If you did find your email, then make sure you go to the submission form page linked in the email and fill out the required information. The deadline for submitting your information is March 31, 2022. Also, continue to keep an eye out for future emails concerning the contest. There are still more steps in the verification process before anyone receives a GPU. You do not want to miss out on a free GPU because you forgot to respond to an email!