The Xe HPG Scavenger Hunt sought to promote Intel's upcoming Arc GPUs, and bring a bit of fun to an otherwise bleak GPU market. Oh, and we cannot forget that 300 lucky participants are going to be receiving a free GPU from it as well. And now puzzle master Eric Mantion, better known as CaptGeek, has revealed how the clues were made, and the meanings behind the answers.

Intel's Scavenger Hunt took place between October 27th and January 31st, and pitted over a thousand participants against one another to see who could solve cryptic clues the fastest. The contest was comprised of ten questions that were released throughout the contest period. As each question was revealed, participants were tasked with finding a clue hidden within a tweet from one of nine desginated Twitter accounts. The faster you were able to solve the clue and find the answer, the more points you accumulated. The top 100 will be receiving a "Premium" Intel Arc Alchemist GPU, while those who placed 101-300 will receive a "Performance" Arc GPU. Those who finished outside of the top 300 will still receive a coupon that will provide $50-$100 off an Arc GPU after launch.

Anyone who took part in the hunt can tell you that it was filled with chaotic moments, as many gathered in Intel's Discord when questions were revealed. The Discord was filled with individuals who were either trying to help one another, or waiting for others to solve it. And of course there were groups who found strength in numbers and operated in secret to be the first to get the answer. People watched the leaderboard in anxious anticipation of someone finding the answer before them. Once an answer was found, it was often leaked into the Discord channel and then became a race to see who could enter it the fastest in order to garner the most points possible. The last four questions were all released in one 24 hour time period, and led to a sleepless day and night for those battling it out to be in the top 300.

As for the questions and clues, they were the brainchild of Eric Mantion, aka CaptGeek. Each answer was deployed in a cryptic manner, and had a hidden meaning behind them. CaptGeek has now shared in a blog post what those meanings were, and how they were hidden within each clue tweet. 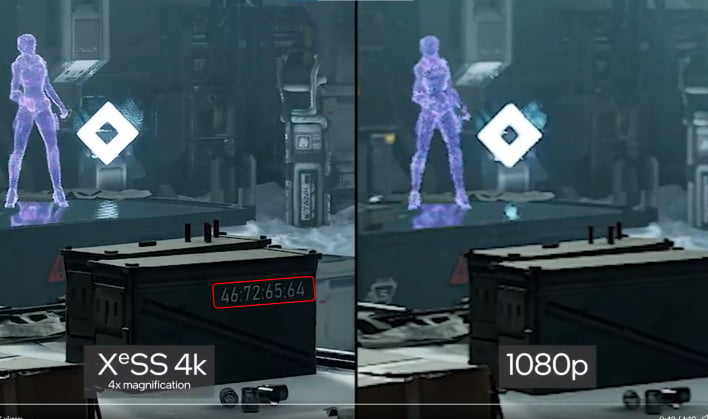 For example, question #2 was hidden within a tweet from Bob Duffy, Engagement Team Manager for Intel Arc. The tweet showed off XeSS in action in a video created by @artbyrens. Within the video itself, a Hex Number was placed inconspicuously onto a box (see pic above). You then had to take the Hex Number and convert it to Unicode to get the answer, "Fred." Easy, right?

Fred was the secret codename that was used by those working on the Intel Arc brand before the official announcement was made. CaptGeek explains, "even if you knew what it was going to be, you had to say 'FRED' when you were in meetings." There was probably only a few hundred people in all of Intel who knew what the final name was going to be before it became public.

If you would like to read about the meaning behind all the clues, you can visit CaptGeek's blog. It is interesting to see how each clue was made and how they related to the upcoming Arc lineup of GPUs.

For those who may have missed out on the frenzied fun of this particular scavenger hunt, there is talks of more to come. Intel is always running some type of contest and giving away free stuff it seems. The best place to stay on top of when it does, is by being part of Intel's Discord. Be sure to join, and perhaps we will see in the next great giveaway.