Apple has historically railed against the PC in some of its ad campaigns, such as the popular "Mac vs PC" ads from years past. However, the company never seemed to take a stand against a particular brand or the processing platform itself, considering Apple and Intel were working together at the time. With that relationship currently over -- for the most part at least -- Intel is taking a jab at Apple with a new ad campaign dubbed "Breaking The Spell," where Apple users are apparently convinced to convert to the PC.

Though Intel's four-minute and two-second advertisement is about as convincing as any other "real people not paid actors" ad spot, it brings up some interesting points. The first of these is the lack of customization and upgradability of many Apple devices. Specifically, components such as the RAM and M.2 Storage are mentioned or highlighted, piquing the interest of the Apple fans that believe they are being made privy to some next-generation, upcoming Apple products.


The next couple of segments focus on game compatibility, interesting or unique PC features, and form factors. This includes multiple touchscreens and the folding or "tenting" ability of 2-in-1 convertible devices that can be used as a traditional tablet or laptop, potentially saving users money and inconvenience by not having to buy two separate devices. You can see how everything plays out in the video above, but (spoilers ahead) it ends up with the participants craving these devices, just before the big reveal is made. 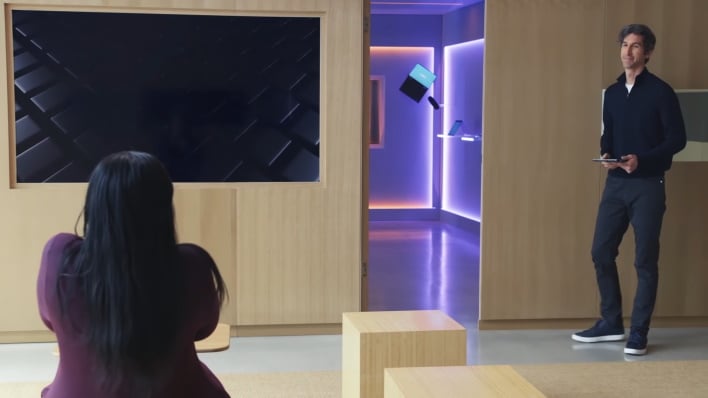 The narrator then tells the people in the commercial that all of the features and capabilities that were showcased were already available on PCs powered by Intel, at which point everyone appears to be in a state a disbelief. Then, in a Bond-like move, a secret door is opened, revealing a room rife with PCs that are all powered by Intel, which seems to amaze the formerly die-hard Mac fans.

Whether the last segment speaks to Intel's messaging not reaching the wider market or Apple's skilled marketing prowess, we can only speculate. What we can say, though, is that Apple does seem to have many users under its spell, i.e. the Reality Distortion Field (RDF), whether warranted or not. For the tech savvy among us, it may seem unlikely that consumers are unaware of some of these features or that convertible 2-in-1 devices exist, but we guess its possible. If so, it's time for PC makers to engage with some fresh marketing and advertising firms. If simply showing die hard Apple fans that these things are currently available is enough to make them jump ship, its obvious their previous efforts haven't been enough.