Earlier this month, we got our first taste of Intel's Iris Xe Max GPU, as the Acer Swift 3x was the first notebook announced to use the discrete graphics chip. Today, however, Intel is actually getting a bit more in-depth with this GPU, which is part of the company's 12th generation graphics family. We were first introduced to with the Iris Xe graphics in Tiger Lake mobile processors.

Like the Iris Xe in Tiger Lake, Iris Xe Max is based on Xe-LP microarchitecture. Iris Xe Max has a total of 96 execution units and a clock speed of 1.65GHz (up from 1.35GHz on Tiger Lake, while maintaining the same max number of EUs). The GPU also has 4GB of dedicated LPDDR4x memory with 68GB/sec of bandwidth. 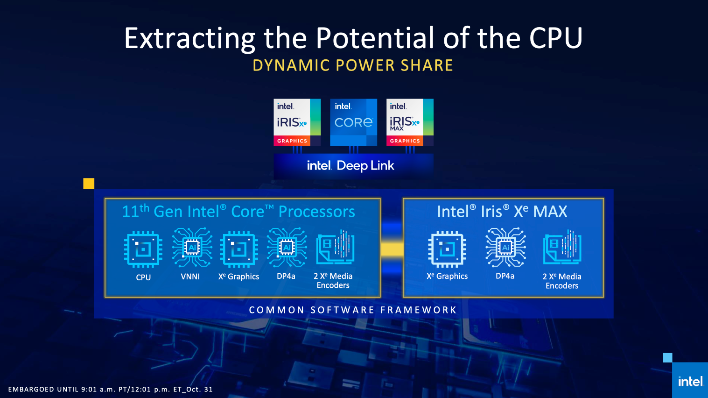 One of the key technologies introduced with Iris Xe Max when incorporated into a Tiger Lake-based system is Deep Link, which is able to leverage the processing power of both GPUs within a system for certain content creation tasks. In other words, both the integrated Iris Xe and the dedicated Iris Xe Max can use Intel's common software framework to accelerate these workloads. 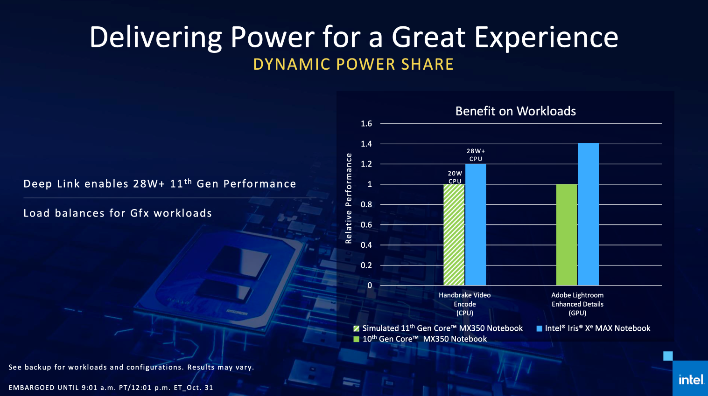 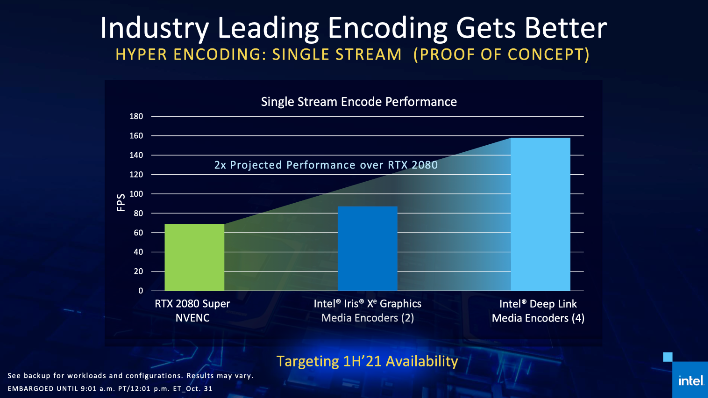 Deep Link allows the Tiger Lake processor to manage both Xe graphics engines to share Xe media encoders and DP4a instructions. For example, Intel can combine the two media encoders in the Iris Xe with the two in the Iris Xe Max to accelerate single-stream encoding. This functionality will not be enabled when Iris Xe Max-equipped system start shipping, and will instead be enabled during the first half of 2021 according to Intel.

However, Intel claims that the integrated Iris Xe with its two media encoders is around 18 percent faster than a GeForce RTX 2080 Super using its industry-leading NVIDIA NVENC encoder. However, Intel is projecting that using Deep Link (combining the two Iris Xe encoders with the two Iris Xe Max encoders), it will be able to nearly double the performance of the GeForce RTX 2080 Super in video encoding.

Although the Iris Xe Max is being targeted at thin and light machines, it is still capable of handling some light gaming... and we do mean light. Intel's performance targets for the Iris Xe Max have it trading blows with NVIDIA's GeForce MX350 discrete GPU for notebooks. Although the Iris Xe Max is able to deliver knockout punches against the MX350 in Metro Exodus and GRID 2019, neither is going to give you much more than 45 fps at 1080p. We have not yet seen benchmarks for NVIDIA’s newer GeForce MX450, but rumors are that it is roughly 33 percent faster than its predecessor, and thus should be more than enough to fend off Iris Xe Max. 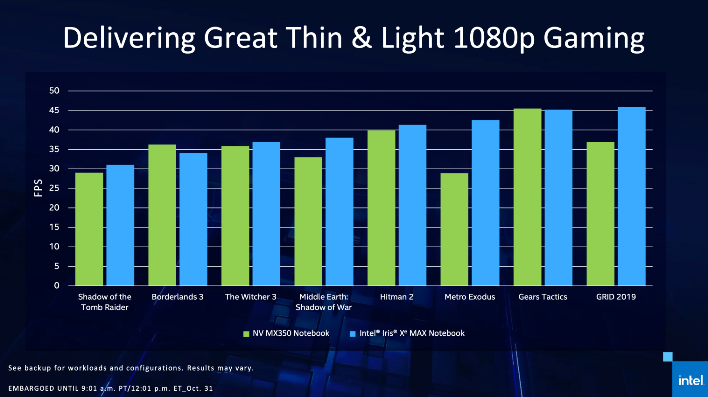 One peculiarity in Intel's slides, however, is that the integrated Iris Xe was actually faster than the discrete Iris Xe Max in DOTA 2. Although we hope that the integrated graphics overtaking its discrete sibling is a rarity, Intel is going to "light up" whichever GPU will provide the best performance for a given game based on over 100 profiles that it has compiled. As the company updates its graphics drivers over time, more game profiles will be added to the mix. And speaking of gaming, you won't be getting any kind of SLI action here with regards to gaming, despite the close relationship between the two GPUs. 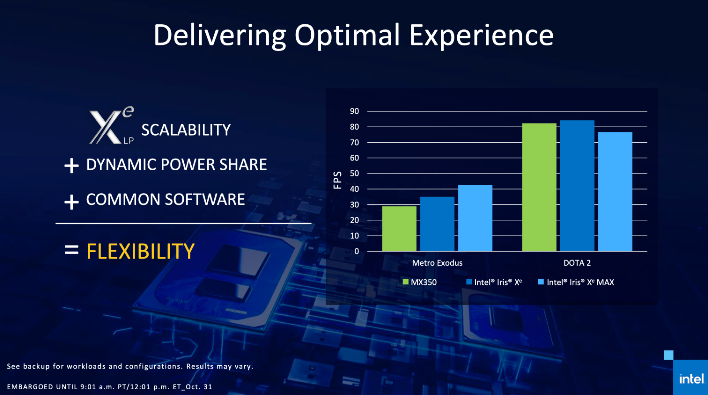 “We set out to redefine the role of discrete graphics in thin-and-light laptops and address a growing segment of creators who want more portability," said Roger Chandler, VP and GM of Client XPU Product and Solutions for the Intel Architecture, Graphics and Software Group. "Iris Xe MAX graphics and Intel Deep Link technology serve as examples of the kind of platform-level innovation that Intel plans to bring to market in the future as we execute to our scalable Xe roadmap.”

At this point, Acer has already announced the Aspire Swift 3x (priced from $899) and both the ASUS VivoBook Flip TP470 and Dell Inspiron 15 7000 2-in-1 will be landing stateside with Iris Xe Max in the coming weeks.