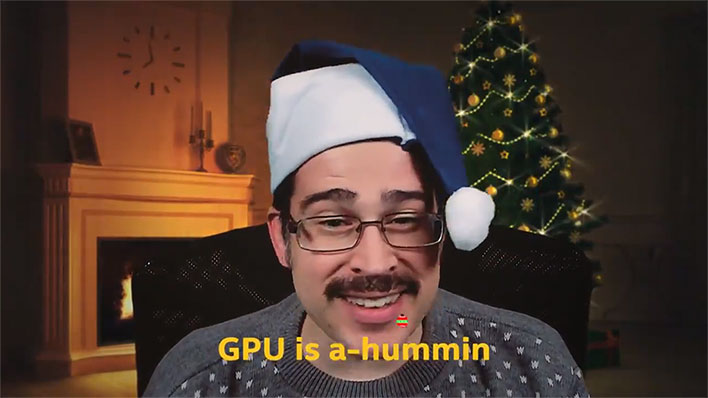 Forget about the water in Silicon Valley, it is the eggnog that is likely to be spiked this time of year, as Intel alludes to in response to a video of its chief community advocate Chris Pirillo belting out a modified version of Winter Wonderland. Or maybe Pirillo is genuinely overjoyed with the progress with Intel is making on its discrete DG1 GPU slated for next year.
It's probably a bit of both. Either way, it's something special to see the founder of LockerGnome and former TechTV host get in the holiday spirit and sing about a GPU. The only critique I would give is this feels like a missed opportunity to don an 'ugly' Windows XP sweater, though he is wearing a Santa Claus hat, so there's that.
Have a watch...

In case you are not able to view the video embed for some reason, Pirillo's modified Winter Wonderland verse consists of...

It's equal parts corny and festive, and we love it. There's also a broader message, in that Pirillo is essentially saying Intel's DG1 discrete GPU is still on track.
His sing-song tweet follows might be a response to some recent rumors. A few weeks ago over at Chiphell, for example, a user claimed that "progress does not seem to be going well" (Google translated text) on Intel's first foray into discrete GPU territory. Then last week, a user on Reddit claimed to have heard from "Intel insiders" that "DG1 is not shaping up very well at all."
It's hard to imagine that Intel and Pirillo were not aware of the rumors. Whether they played a role in the festive tweet, who knows. Regardless, the light-hearted song delivers a serious message—DG1 is humming, it's coming (presumably soon), and it slays (or "sleighs," if you prefer). Time will tell.