Intel Core i9-12900KS Takes A Liquid Nitrogen Bath And Gets Overclocked To 7.45GHz

Intel claims its newly minted Core i9-12900KS Special Edition processor is the world's fastest desktop CPU, though it's not necessarily talking about benchmark performance—the Core i9-12900KS can hit up to a 5.5GHz turbo frequency on one or two cores. That's at stock settings, and of course it didn't take long for someone to blow past the stock threshold.
MSI's in-house overclocker "TSAIK" dipped the binned chip in liquid nitrogen (LN2) and cranked up the unlocked multiplier to achieve a blistering fast 7.45GHz clock speed, or 7,450.62MHz to be more precise. They then validated the overclock with CPU-Z to make it official (and MSI beat its chest on Facebook to celebrate the overclock). 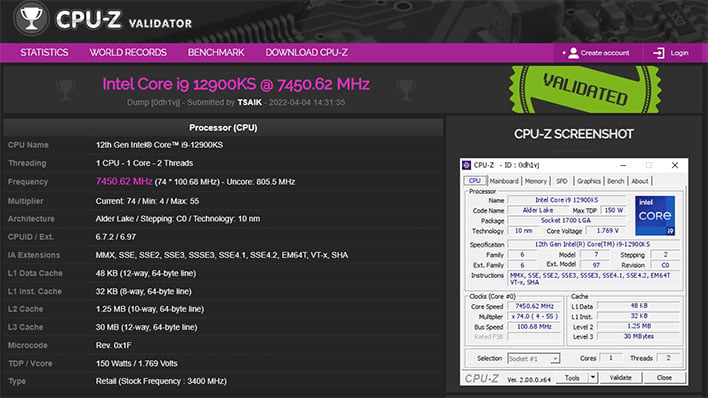 TSAIK employed MSI's MEG Z690 Unify-X motherboard to hit the blisteringly high overclock. The rest of the setup entails 16GB of Samsung DDR5-4800 memory, a GeForce RTX 2060 Super graphics card, 1280GB SanDisk X300 SSD (2.5-inch SATA), and Windows 7 Enterprise Edition (64-bit).
The obvious caveat here is the use of LN2 cooling. That makes this kind of overclock totally impractical for anything outside of attempting world records. It's also worth noting that TSAIK only enabled a single Performance core (P-core).
It's still an impressive run, and it comes early in the game—the Core i9-12900KS only released last week. As time goes on, we fully expect to see more extreme overclocks and benchmarking records with this Intel's latest Alder Lake chip. So MSI might not be finished flexing on Facebook.
Bear in mind that this is a binned version of the Core i9-12900K, which has been out longer and holds a whole bunch of benchmarking world records. Most of them have been obtained by Splave, as outlined on HWBot. There's the potential the Core i9-12900KS could steal some of those records away.