If you are looking forward to testing out Intel's upcoming Arc GPUs, then you may get some cool software with your purchase. The tech giant is looking to promote the release of its Alchemist lineup by providing buyers with a few games and software titles to use with their new GPU and CPU combo.

The launch of Intel's lineup of Arc GPUs has not been smooth sailing for the company. It began the hype train in late 2021 with a scavenger hunt, which will reward those who placed in the top 300 with a limited edition A770 or A750. The year has since been filled with delays. Intel has promised to release the desktop variants "soon", and most recently "very, very soon," along with contest winners still awaiting their prizes. Well, the launch may indeed be soon, as the company looks to be readying to release promotional bundles for those who choose to purchase a device that includes an Arc GPU, along with an Intel 12th Gen CPU. 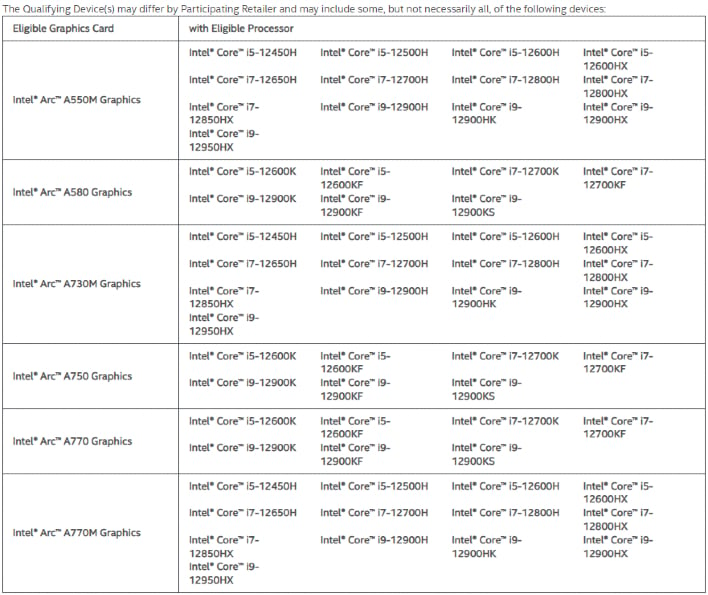 To be clear, Intel did not announce the upcoming bundle. Twitter leakster momomo_us uncovered the details via an orphaned Terms and Conditions page. According to the page, the program will be called "Intel Software Advantage Program" and include an "Intel Arc 5/7 Systems Bundle." You can see the chart above that outlines what the "Qualifying Device(s)" may include.

As for what the rewards of the program are, it will include four "Premium Software" game titles, and a choice of 3 out of 5 "Featured Software" titles (see below for complete list). The estimated total value of software is $370+ USD, according to Intel. 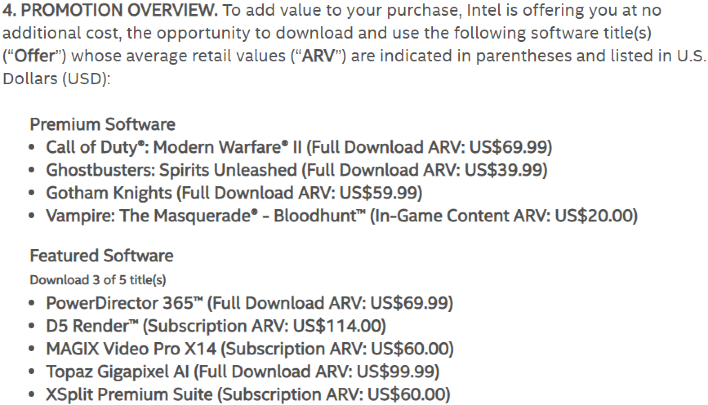 In order to take advantage of the program, consumers will need to purchase one of the qualifying devices between August 25, 2022 and December 31, 2022. Once you have purchased the GPU and CPU, you must then redeem the software offer by January 31, 2022.

It is important to note that being this was not officially announced by Intel, terms and conditions could change, or the program may not be offered at all.

Intel knows that it more than likely will have to sweeten the pot for more gamers and content creators to buy into the Arc GPU hype. Recently Tom "TAP" Petersen made it clear that if you cannot enable re-BAR on your motherboard, you are simply better off to stick with the competition. That is because without resizable BAR activated, Arc GPU performance is reported to plummet. The good news for those taking advantage of Intel's Software Advantage Program, is that they will be purchasing a device with re-BAR more than likely already enabled.