If you can remember when the Intel 4004 debuted, don't forget to take Ibuprofen for your backache. Recognized as the world' first commercially available processor, the Intel 4004 is now 50 years old after having launched back in November 1971. How do you celebrate 50 years? By stripping down and showing you still got it, of course!
Okay, maybe that's not how everyone commemorates 50 years. But that's the kind of party extreme overclocker and the CEO of HWBot Roman "der8auer" Hartung decided to throw for Intel's first processor, a 4-bit wonder (at the time) that proved complex integrated circuits could fit on a chip no bigger than a human fingernail.
"[Looking back at] 1970, it was clear that microprocessors would change the way that we design systems, switching from using hardware to software instead. But the speed with which microprocessors developed over time and were adopted by the industry was really surprising," said Federico Faggin, former Intel engineer who designed and produced the Intel 4004 with Tedd Hoff and Stan Mazor.
The Intel 4004 with its 16-pin design and 2,300 transistors wasn't bound for a desktop computer but a desktop calculator (and later pinball machines), though it delivered the same computing power as the first electronic computer in 1946. That thing filled an entire room, whereas the Intel 4004 enabled much smaller form factors. Now 50 years later, it's been delidded (sort of).

Turns out that de-capping the epoxy-fused case to expose the die is a difficult challenge. It's also expensive. An original Intel 4004 from the 1970s with ceramic packaging can fetch thousands of dollars on eBay. For this project, Der8auer used a newer and more affordable version in a black plastic casing (typically sells for a few hundred bucks). He essentially wet-sanded the cap by hand. 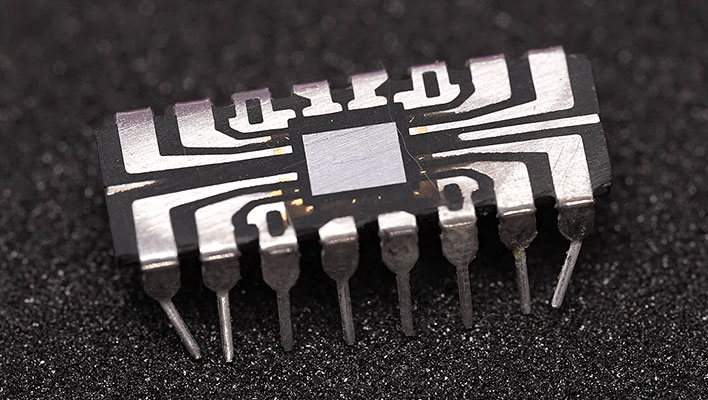 After lapping and grinding for about 20 minutes, some gold spots from the bond wires revealed themselves. Unfortunately by the time most of the chip was exposed, most of the circuits had been rubbed away too. Grinding is just not the best method for stripping the Intel 4004. Nevertheless, it's still neat to see the casing mostly gone, laying bare the chip and paths of the 16 metal pins.
Der8auer had a feeling it would go this way, hence why he used a less rare version of the Intel 4004. He also plans to follow this up with another attempt at some point.