Intel is planning to roll out new Xeon processors this year, including ones built around its 10th generation Ice Lake architecture, which is already shipping in consumer laptops. Built on a 10-nanometer manufacturing process, the Ice Lake-SP Xeon lineup will go toe-to-toe with AMD's Zen 3-based EPYC "Milan" processors in the server space. A leaked benchmark of one of the upcoming CPUs indicates Intel has itself on solid footing. Well, maybe.

Back in October of last year, a presentation slide from an ASUS IoT seminar highlighted some of what Intel has in store for the server sector. One of the takeaways is that Ice Lake-SP processors will be paired with Intel's Whitley chipset, and will use socket P+ in 2S configurations.
The presentation also revealed Intel is planning to launch Ice Lake-SP Xeon processors with up to 38 cores and 76 threads (per socket), with a TDP of 270 watts. These chips will feature support for 64 PCI Express 4.0 lanes, 8-channel DDR4-3200 memory (16 DIMMs per socket), and Intel's second generation Optane DC Persistent Memory.
It will be a notable launch because it bring Intel's server product offerings into 10nm territory, a place it has struggled to occupy in general. At present, the only 10nm chips shipping in volume from Intel are its mobile Ice Lake processors for consumer laptops.
Ice Lake itself is based on Intel's Sunny Cove architecture. It is expected to bring a big performance uplift in the server space, and a leaked Geekbench entry provides an early look at how things could shake out. 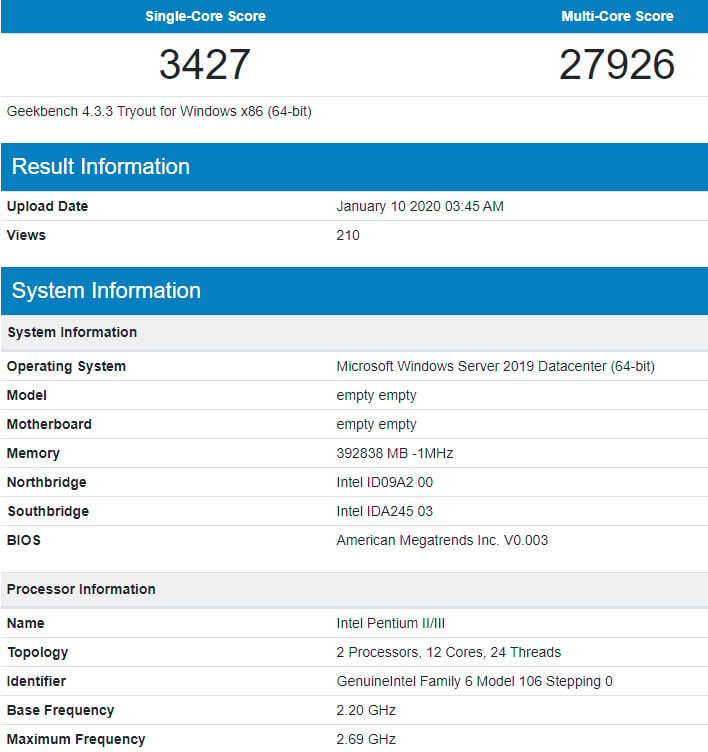 This is obviously a server setup, as indicated by the gobs of memory and Windows Server 2019 OS. As for the CPU, Geekbench lists it as having two processors, each with 12 cores and 24 threads, with a 2.2GHz base clock and 2.7GHz turbo clock. We can't say if those speeds are accurate—it's possible Geekbench is not reading the CPU correctly, and assuming this is an engineering sample, the final specifications could differ even if those are correct.
The Ice Lake-SP Xeon part scores 3,427 in the single-core test and 27,926 in the multi-core test. Performance comparisons are tricky because Geekbench is sensitive to builds (you can't really compare Geekbench 5 results to Geekbench 4 data) and different OSes. That said, here's how these results stack up to a benchmark run from a Xeon W-3235 in a VMWare environment... 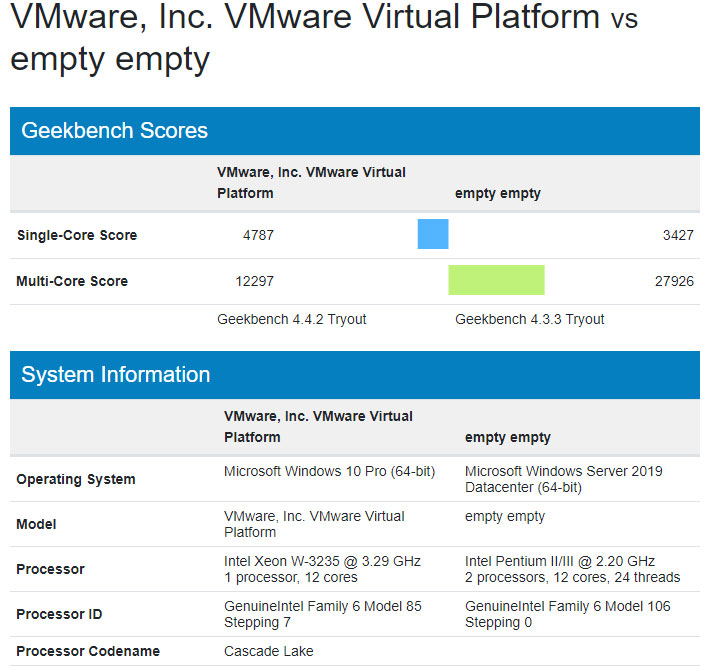 The Xeon W-3235 is also a 12-core/24-thread part. It's all a bit confusing because there is not clarity on how Geekbench is reading the data. However, WCCFTech insists that the Ice Lake-SP Xeon entry is only being read as "2 processors" because it is a virtualized hypervisor, and that it's not really 24 cores total, but 12 cores and 24 threads total, just like the Xeon W-3235 part. Color us highly skeptical.

Single-core performance makes sense—the lower clockspeed puts the Ice Lake-SP Xeon at a disadvantage, and it predictably scores lower. But looking at the Ice Lake-SP Xeon's multi-score score, it is more than twice as high. Are we really looking at a greater than 100 percent uplift? Probably (almost definitely) not—that is a massive difference, and we can't wrap our heads around how that would be possible, without single-core performance showing a similar gain.
Doubling the core and thread counts to 24 and 48, respectively, makes more sense with these results. But hey, therein lies the frustration with leaked data—nothing is ever certain. That said, we would expect the move to a 10nm node would yield a performance gain and better efficiency. Just how much, however, remains to be seen.