A new study indicates that a giant tsunami caused by an asteroid impact played a large role in the extinction of many of the dinosaurs. The miles-wide asteroid that impacted Earth an estimated 66 million years ago took out nearly all the dinosaurs and about three-quarters of the planet's plant and animal species, according to the new study.

The study takes a look at the asteroid impact on Mexico's Yucatan Peninsula through a global simulation of the Chicxulub impact tsunami. U-M researchers reviewed the geological record at more than 100 sites worldwide and in turn found evidence that supports the simulation's predictions about the catastrophic tsunami's path and power.

"This tsunami was strong enough to disturb and erode sediments in ocean basins halfway around the globe, leaving either a gap in the sedimentary records or a jumble of older sediments," remarked Molly Range, who conducted the modeling study for a master's thesis under U-M physical oceanographer and study co-authors Brian Arbic and Ted Moore.


Range says that the distribution of the erosion and hiatuses that were seen in the uppermost Cretaceous marine sediments were consistent with the model they developed. The calculated initial energy in the impact tsunami was up to 30,000 times larger than the energy in the December 2004 Indian Ocean earthquake tsunami. That tsunami was responsible for the deaths of more than 230,000 people and is one of the largest on record.

The simulation shows the impact of the tsunami was mainly focused to the east and northeast into the North Atlantic Ocean, and to the southwest through the Central American Seaway. However, the South Atlantic, the North Pacific, the Indian Ocean and the region known today as the Mediterranean were mostly shielded from the most damaging effects of the tsunami in the simulations. 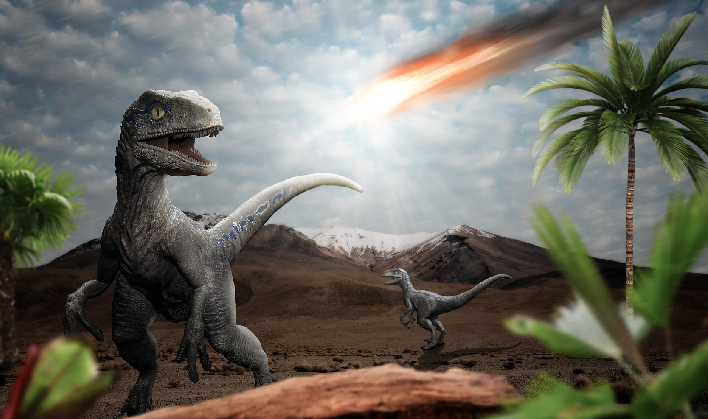 The study modeled the asteroid after previous findings. They estimated the asteroid to be 14 kilometers (8.7 miles) in diameter, moving at 12 kilometers per second (27,000 mph). As it struck, it produced a roughly 100-kilometer-wide (62-mile-wide) crater and ejected dense clouds of soot and dust into the atmosphere.

According to the team's simulation:
"Depending on the geometries of the coast and the advancing waves, most coastal regions would be inundated and eroded to some extent," according to the authors. "Any historically documented tsunamis pale in comparison with such global impact."