Huawei on Thursday unveiled a new flagship smartphone line, the Mate 40 series, which is set to duke it out in the luxury handset market against the likes of Samsung. One of the things that stands out about the Mate 40, Mate 40 Pro, and Mate 40 Pro+ is the circular camera pod on the back. Funky rear camera bumps are a way of life these days, and this one is somewhat reminiscent (in appearance) to the circular iPod dial from years ago.
Referred to as a "Space Ring" design, it houses three or four camera sensors, depending on the model. On the base Mate 40, this consists of a 50-megapixel main camera (f/1.9 with OIS), a 16-megapixel wide-angle lens (f/2.2), and an 8-megapixel telephoto lens (f/2.4 with OIS).
The Mate 40 Pro also boasts a 50-megapixel primary shooter, but ups the ante with a 20-megapixel wide-angle lens (f/1.8) and 12-megapixel 5x periscope telephoto camera (f/3.4). Meanwhile, the Mate 40 Pro+ sports a 50-megapixel main sensor (f/1.9), 20-megapixel wide-angle sensor (f/2.4), 12-megapixel 3x telephoto camera (f/2.4 with OIS), 8-megapixel 10x periscope telephoto lens (f/4.4), and a ToF sensor. There is also a color temperature sensor on the Porsche Edition model.
"The camera system on the Huawei Mate 40 series has been co-engineered with Leica to provide the best camera solution possible and sees breakthrough up grades to the ultra-wide angle lens, powerful high-definition main camera, impressive telephoto camera and more," Huawei says. 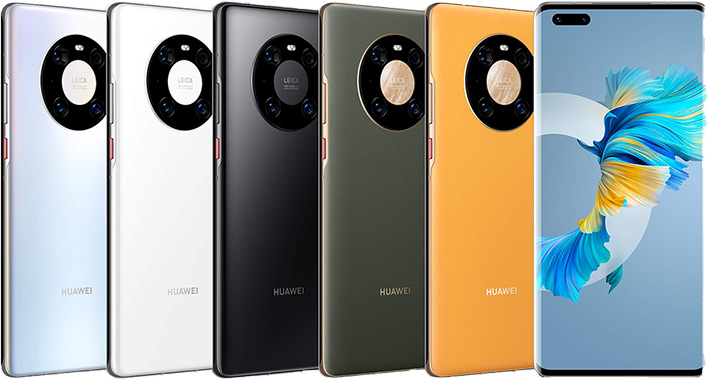 The Pro variants feature a regular Kirin 9000 SoC which is mostly the same, save for a 24-core Mali-G78 GPU and Dual Big Core + Tiny Core NPUs, and 256GB of storage (or 512GB on the Porsche Edition). In addition, the Pro+ gets bumped up to 12GB of RAM. Interestingly, the Kirin 9000 is built on TSMC's 5-nanometer manufacturing process.
Huawei's challenge is the software. US sanctions prevent the company from licensing Google's services. As a result, these phones run EMUI 11, which is based on Android 11, but lack access to the Play Store and Google's other homegrown apps and services. That makes it a tough sell. And going forward, this might be the end of the road for Kirin chips produced by TSMC.
In any event, the Mate 40 is launching for €899 in Europe, the Mate 40 Pro for €1,199, and the Mate 40 Pro+ for €1,399.