HP is refreshing its Omen and Victus gaming laptops with better cooling and upgraded hardware options from Intel, AMD, and NVIDIA. The best part is, they're perhaps more affordable than some people may have anticipated—pricing starts at $799.99 for the Victus 15 and $1,199.99 for the Omen 16.
The Victus is essentially the younger sibling to the Omen. It first debuted last year and aims to deliver a gaming punch in a more affordable package, with style points to boot. Offered in Mica Silver, Ceramic White, and Performance Blue color options, the latest addition to the Victus lineup is the first in the 15.6-inch form factor.
Buyers will be able to configure the Victus 15 with up to an Intel Core i5-12500H Alder Lake processor paired with up to a GeForce RTX 3050 Ti GPU, or an AMD Ryzen 5 5600H CPU with a Radeon RX 6500M. Both feature a 15.6-inch display with a 1920x1080 resolution, though only the spec sheet for the Intel configs specifically mentions a 144Hz refresh rate.
Other features include 8GB of DDR4-3200 RAM, 512GB SSD storage, Wi-Fi 6 connectivity, dual speakers tuned by Bang and Olufsen, an SD memory card reader, and an assortment of ports. In addition, HP carved some big vents on the bottom and says it the airflow is much better compared to the Victus 16. 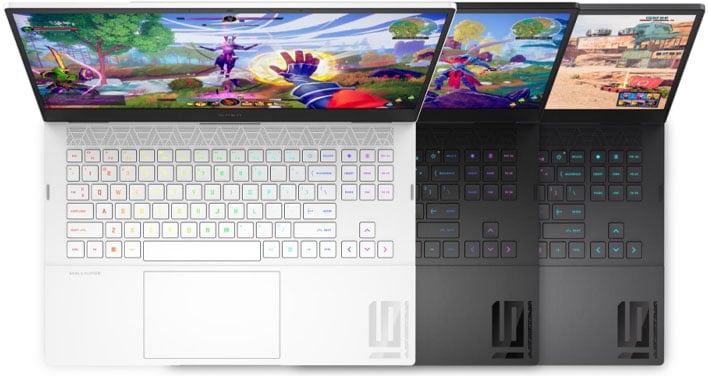 Both the Victus 15 and Omen 16 will be available this summer.