Mozilla’s Firefox is generally considered a safe, privacy-centric browser. However, a change to the default configuration of a relatively new feature may change some users' minds. Firefox is now sending keystrokes, location info, and more back to Mozilla. Thankfully, there is a way to disable some of this, which we will get to shortly.

In Firefox version 92, Mozilla enabled its “Firefox Suggest” feature by default, a significant change from the feature's initial launch back in September. According to a Mozilla blog post, “Firefox Suggest” is a “new discovery feature that is built directly into the browser” that provides suggestions based on what you are typing, rather than having the URL bar solely be a search engine interface. 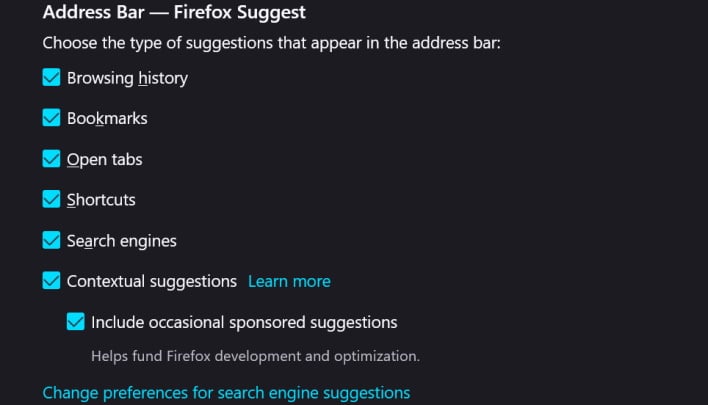 To accomplish this, Firefox “send[s] Mozilla new data, specifically, what you type into the search bar, city-level location data to know what’s nearby and relevant, as well as whether you click on a suggestion and which suggestion you click on.” While this would be fine if Firefox Suggest were an opt-in only experience, this is no longer the case, and privacy-oriented people should consider disabling the feature. You can do so by following the steps below:

That said, some users may not be concerned about this data being sent to Mozilla and may consider Firefox Suggest is a handy feature. And Mozilla's privacy policy is generally sound. In fact, it explicitly explains that the data collected will only be used in ways for which the user has permitted.

In any event, most browsers collect some data. Is this something you'd be worried about? Let us know what you think in the comments below.