For a time, my main PC rocked a pair of 480GB Intel SSD 730 series drives in RAID 0 and I thought that was the bee's knees. It seemed like storage nirvana back in the day. My, how times have changed in the past eight years. Fast forward to today and I find myself drooling over the prospect of running a pair of HighPoint Technologies' 8-port SSD7540 RAID controllers.
These days, the fastest consumer SSDs have transitioned over to the M.2 form factor, and specifically those with an NVMe interface (you can also have a SATA drive in the M.2 form factor). They're incredibly speedy, offering sequential reads and writes in the neighborhood of 7,000MB/s (or 7GB/s) in PCIe 4.0 territory. The emergence of PCIe 5.0 will double that metric.

Highpoint's SSD7540 kicks things up a notch, though, offering massive storage capacity and explosive data speeds in a sleek package. The caveat? You have to bring your own SSDs. Oh, and this kind of modern day storage nirvana doesn't come cheap. More on that in a moment, but first let's talk specs.

The SSD7540 is an 8-port M.2 NVMe RAID controller and is billed as the fastest of its kind in the realm of PCIe 4.0. There are eight independent M.2 ports supporting up to 64TB of total storage capacity. That's a lot of storage, but it's the speed potential that is just as delicious. 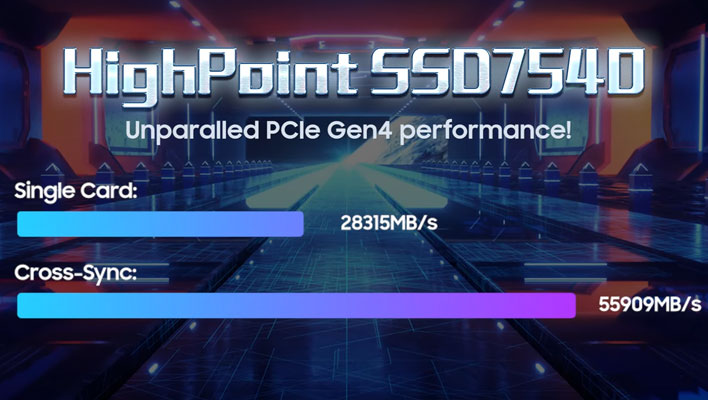 According to HighPoint, a single card populated with Samsung's 980 Pro SSDs delivers sequential read performance topping 28GB/s. And if you run two of these cards populated with 16 Samsung 980 Pro SSDs, you're looking at a whopping 55.9GB/s data speed.

HighPoint says its SSD7540 card will work in any computing platform with an industry standard PCIe 4.0 or 3.0 x16 slot. The company also notes that like all SSD7500 series NVMe RAID controllers, the SSD7540 does not require a host platform with Bifurication support, and is not dependent on any specific motherboard brand or model.
"HighPoint 7500 Series NVMe RAID controllers will automatically recognize new NVMe SSDs as single drives—no configuration necessary. In addition, our comprehensive NVMe RAID stack enables each controller to support RAID multiple RAID 0, 1 or 10 arrays, or mixed configurations of single disks and RAID storage," HighPoint says.
Back to that caveat mentioned earlier, in that the HighPoint SD7540 is not a cheap add-in card. You can find it on Amazon for $1,131.99 currently. Samsung doesn't offer its 980 Pro in 8TB capacity, but if you're wanting that capacity, you're looking at something like the 8TB Sabrent Rocket 4 Plus, priced at $1,499.99 on Amazon. If going all out with two cards and 16 of those SSDs for a mind boggling 128TB of storage in RAID 0, you're looking at a cool $26,263.82.