Benchmarks don't tell the whole story when it comes to device performance, but they can provide important points of comparison. Not all benchmarks are created equal, though. You need something that supports the latest technology to properly assess the capabilities of a device, particularly one that fits in your pocket. To wit, Basemark has just released the first mobile benchmark with support for variable rate shading, and we ran it through its paces on some of the latest smartphones.

Variable Rate Shading (VRS) is not specific to mobile GPUs—it's also available in PC and consoles. The gist is that VRS allows a GPU to more efficiently utilize its processing power by understanding the context of each frame. Perhaps one area needs the full rendering power of the hardware to generate high levels of detail, but another area could get by with much less. VRS makes that possible.

Basemark says its new GPUScore: The Expedition is the first mobile device benchmark capable of testing VRS. As you'd expect, this feature is still rare on smartphones, but as consumers demand more from handheld gaming experiences, VRS could become an important technology. The benchmark supports both Vulkan and Metal, and it's available on both Android and iOS. However, not all mobile GPUs are capable of VRS. You won't see the VRS test on the iPhone with its custom Apple GPU, nor on Google Tensor, which uses an ARM Mali—this technology is still very new in mobile chipsets. Qualcomm is ready for the variable rate future, though. 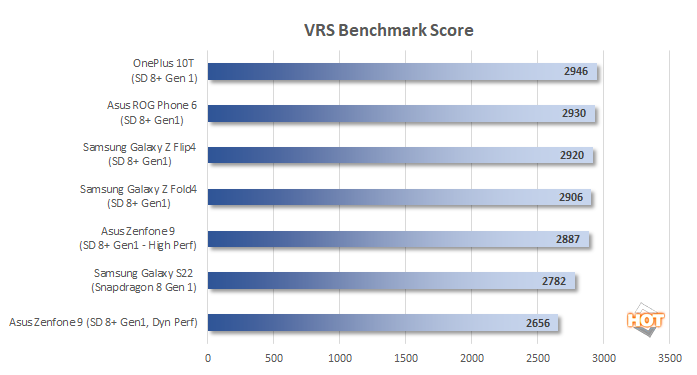 As you can see above, the devices with a Snapdragon 8+ Gen 1 are leading the way around 2900. The Galaxy S22, which has a non-plus Gen 1 is a few hundred points back. Even the OnePlus 10T, which has better cooling and performance tuning, is only a bit ahead of Samsung's current flagships. This shows us that VRS performance is largely dependent on the chipset and less so on device optimization. The more power-efficient Dynamic mode on the Zenfone 9 is much slower, though.

The chipset is only half of the variable rate battle. Game developers need to add support for VRS, and that's going to take time. It might take Apple adding support for VRS before developers on the Android side take it seriously. If you want to get a sneak peek at VRS performance on your phone, you can download the app right now on the Play Store and App Store. Phones that don't support VRS won't show that test as an option, but you can run other benchmarks in the app as well.