Yo Dawg, We Heard You Like Doom So Here's Doom Running In Doom

It seems like every day there's a new thing that people are getting to run Doom. It's such a lightweight game, but still fun to play, and it's easy to get running in many things, even a scientific calculator. Additionally it's old enough that there are exploits in it that make it easy for lots of custom and arbitrary code execution.

Well, YouTuber kgsws has decided that we don't have enough Doom in our lives. So, they decided to show that it is possible to run Doom from within the game itself. Kgsws points out during the YouTube video that he ultimately found the method of loading arbitrary code in a function that loads objects into the game. The reason it works is because there's no validation as to what the game object that is expected to load. This means just about any file of any file type can be potentially loaded into the game engine using the level object loading code.


Through the video a few other bugs and odd behaviors are also explored. For example, item pickup is actually related to the texture applied to the object loaded into the level, not the object ID. This means you can decide to load a differing object even after the level loads. So lets say you load a cacodemon texture on top of the rocket launcher ammunition. Well, if you do that, the cacodemon has no behavior because the game still thinks it's the rocket launcher object. However, because pickup relies on texture, you cannot pick up the cacodemon as a rocket.

Of course, loading Doom into Doom is not, technically, new, as we've seen id Software, and now Bethesda, load Doom, and Doom II into their newer versions of the game. That said, before today we had never seen Doom II running in Doom  II. The Doom source code was released to the public 11 years ago by id Software, and there have been dozens of derivatives since then. This particular instance uses one called Chocolate Doom. 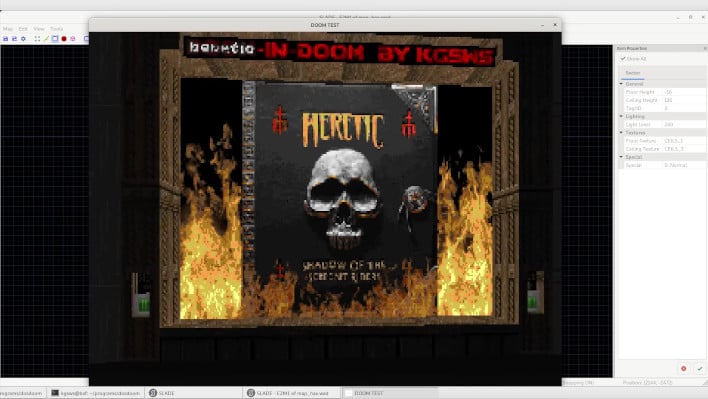 
Additionally, because of the fact that this is arbitrary code execution, kgsws also decided to show that they could load another classic first person game, Heretic, into Doom. So now it's possible to play Heretic, or potentially Hexxen in Doom or Doom II. Maybe one day we'll see Crysis run in Crysis. Though according to kgsws running Doom in Doom requires double the memory, so make sure you have at least 16MB of RAM available.