Spinning platters have served the storage scene well over the years, and even as faster (and pricier) solid state drives with no moving parts have gained considerable traction, the good old fashioned mechanical HDD is still a popular option for bulk storage chores. The price per gigabyte just can't be beat. That will probably be true for a long while to come, especially if new research into a graphene coating bears fruit. Researchers at the University of Cambridge claim it could enable ultra-high density HDDs that are 10 times more capacious than today's models.
Such a massive increase would be an incredible development for a storage medium that first appeared around 70 years ago, in the 1950s. HDDs really became popular in the mid-1980s, and have become denser and more advanced as the years have gone by. Some HDDs are even filled with helium, which offers several benefits—less drag and the enabling of thinner tracks, to name just two of many.
The real breakthrough, however, could be replacing today's carbon-based overcoats (or COCs) with up to four layers of graphene.
"Beyond its unbeatable thinness, graphene fulfills all the ideal properties of an HDD overcoat in terms of corrosion protection, low friction, wear resistance, hardness, lubricant compatibility, and surface smoothness," the researchers say. "Graphene enables two-fold reduction in friction and provides better corrosion and wear than state-of-the-art solutions. In fact, one single graphene layer reduces corrosion by 2.5 times."
There are two major parts to a hard drive, those being the platters that hold the data, and a magnetic head that reads it, sort of like a spinning record player (kids these day call them vinyl). Storage capacity increases by adding more platters and decreasing the space between the head and platter, to enable higher densities.
Moving parts of increasing complexity make HDDs rather delicate. This is where COC layers come into play—they protect platters from damage and corrosion, and take up a significant part of the spacing. Over the years, COC thickness has gone down from 12.5 nanometers (nm) to around 3nm, which is equivalent to one terabyte per square inch. 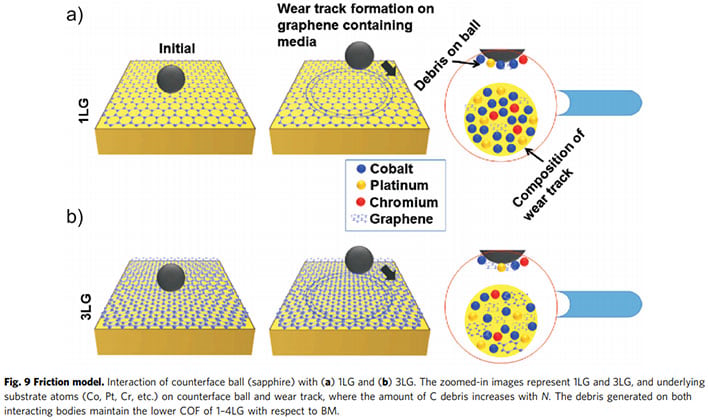 In an HDD research paper (PDF) published at Nature Communications, Cambridge scientists claim graphene has enabled researchers to multiply this by ten. What they did is transfer graphene onto HDDs made of iron-platinum as the magnetic recording layer, and tested heat-assisted magnetic recording (HAMR).
According to the researchers, graphene is much better suited for higher temps presented by HAMR, compared to COCs, and thus can enable densities of more than 10 terabytes per square inch. Graphene has become the sort of wonder-material full of promise, at least eventually—we're still waiting for graphene batteries that promise that boost capacities by 45 percent.

"Demonstrating that graphene can serve as protective coating for conventional hard disk drives and that it is able to withstand HAMR conditions is a very important result. This will further push the development of novel high areal density hard disk drives," said Dr Anna Ott from the Cambridge Graphene Centre, one of the co-authors of this study.
In short, graphene could enable much higher HDD capacities and greater durability, which would be especially great for cloud storage outfits. As the researchers point out, annual data creation is expected to reach a staggering 163 zettabytes (or 163 trillion gigabytes, if you prefer) by 2025.
It's not clear what roadblocks stand in the way of implementing graphene layers in the real world (probably cost), but this is definitely something HDD makers should look into.