The so-called liquid metal thermal compounds are well regarded for their heat conductivity, but they come with extra hazards. They are thus not the best choice for novice or nervous PC DIYers. This fact is illustrated very clearly by a graphics card sent to overclocker Roman “der8auer” Hartung, which was in a very sorry state due to the contamination of liquid metal on the cooling block and nearby areas.
Liquid metal thermal preparations for processor cooling purposes have two major drawbacks. Firstly, they are electrically conductive. Users have to be very careful with restricting where droplets of this stuff goes. It isn’t very sticky or putty-like, which makes spillage and leakage more of a risk.
Secondly, and the major problem in the case illustrated by the video below, these thermal preparations contain gallium, which has a detrimental effect on the structure of aluminum. There are many YouTube videos showing the interaction of these two metallic elements. In full effect with lashings of gallium poured onto aluminum, you will quickly see the aluminum get permeated by the other element. Gallium softens aluminum, giving it a soft, chalky, and easy to crumble form. For example, the application of gallium can weaken a large aluminum padlock enough for you to break it apart with your bare hands.
Moving back to the headlining topic, an inexperienced PC DIYer must have thought using liquid metal on his GeForce RTX 2060 would benefit his GPU temperatures. He appears to have wisely taken some precautions by varnishing over the electronic components in the vicinity of the GPU so any small conductive material spills or seepage should not cause issues. However, the cooler making direct contact with the GPU, and thus the chosen thermal interface material, was an aluminum block in this example. It had a protective layer of nickel, but the layer must have been very thin and perhaps scratches or abrasions allowed gallium to get to the underlying aluminum. Der8auer explains more about the material science behind the gallium-aluminum interactions and the problems that can arise pretty well from about 3 minutes into the video.
Some of der8auer's investigations revealed that the gallium penetration into the cooling block wasn’t too deep. He figured milling away the affected area to a depth of half a millimeter would eliminate any latent hazard. After getting rid of the contaminated metal mix, there had to be adjustments made to the standoffs to maintain GPU pressure, and similar adjustments to thermal pad thickness and so on were required too. Basically, any contact surface between PCB and cooler needed adjusting due to the milling away of 0.5mm of material. The overclocking expert applied some conventional non-gallium, non-electrically conductive thermal paste before reassembly of the graphics card. 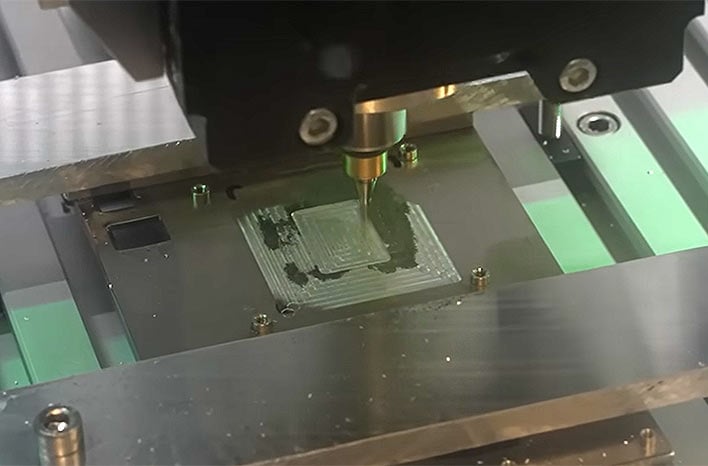 The result is that the old RTX 2060 is no longer bouncing off 100 degrees Celsius and throttling. Instead, the average temperature under the heaviest loads was about 76 degrees with an acceptable hotspot of 90-ish after the repair. It has been sent back to the der8auer YouTube channel viewer who sent it in. When he gets it back we think it would probably further benefit from some undervolting attempts, to make the graphics card a bit cooler and quieter.