If you've had your eyes on the GPD Win 3 handheld gaming PC ever since it was first unveiled back in November 2020, we've got some good news for you. The portable gaming device is now available for preorder on Amazon, with an estimated release date of June 2nd.

The GPD Win 3 has captured so much attention due to its small form-factor, which looks like a cross between a Nintendo Switch and an old Sony Vaio UX UMPC. Perhaps the most intriguing thing about the device is its 5.5-inch display, which slides upward to reveal a dainty backlit QWERTY keyboard for input. The integrated hardware keyboard allows you to input text on the go without the need for an on-screen keyboard (which would be cumbersome with such a small display) or an external USB/Bluetooth keyboard.

The real magic happens inside, where the Win 3 is powered by an 11th generation Core i5-1135G7 processor, a 4-core/8-thread design with base/turbo clocks of 2.4GHz and 4.2GHz, respectively. Just as crucial for a device of this size aimed at gaming is the GPU. In this case, the handheld PC leverages the integrated Iris Xe GPU that features 80 EUs. The Iris Xe should be more than capable of handling games on the 1280x720 touch display.

Despite its relatively small size, the Win 3 features a Thunderbolt 4 port, a USB-A port, a MicroSD slot, and a 3.5mm headphone jack (which is more than we can say for an even larger device like the MacBook Air). As for wireless connectivity, there's Wi-Fi 6 and Bluetooth 5.0 support. An optional USB-C dock plugs into the Thunderbolt 4 port and adds HDMI, USB-C input, three USB-A ports, and a GbE port. 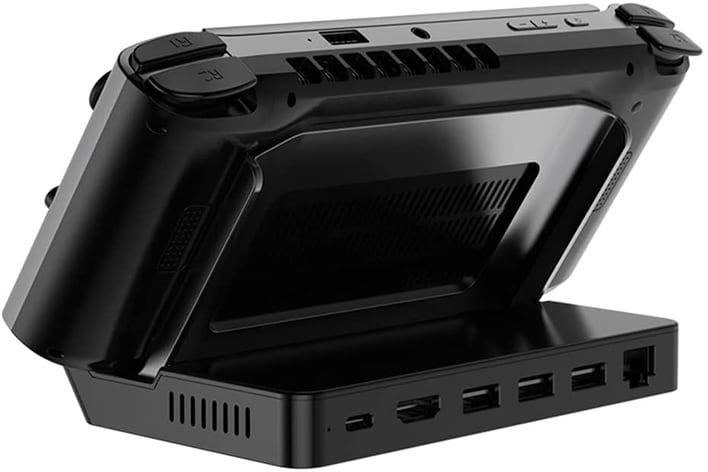