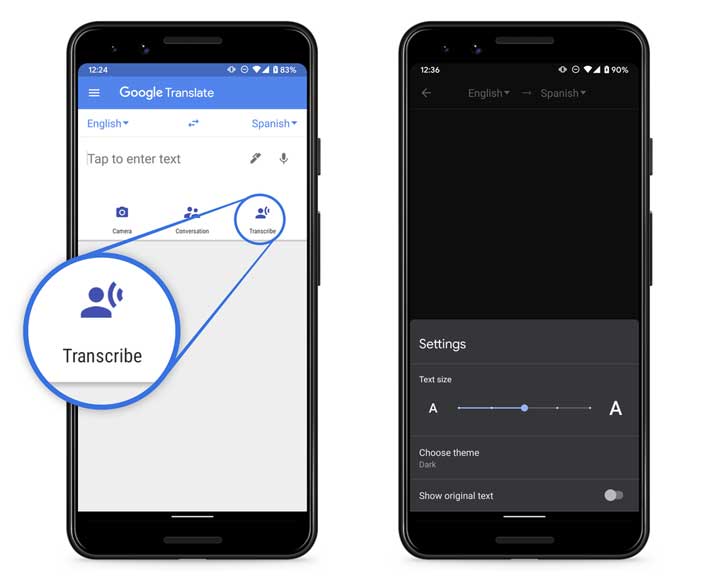 Google has announced that starting today, the Google Translate Android app can transcribe foreign language speech as it's happening in real-time. That means you can launch the app as someone is talking or audio is playing back on a computer and translate it immediately. Google says the feature will be rolling out over the next couple of days with support for any combination of eight major languages.

Supported languages include English, French, German, Hindi, Portuguese, Russian, Spanish, and Thai. Only the latest version of the Translate app available on the Play Store supports the transcribe feature. Once the latest version the app is installed, users can access it by tapping on the "Transcribe" icon from the home screen and selecting the source and target languages.

The app allows users to pause or restart transcription by tapping on the mic icon. Users can also see the original transcript, change the text size, or choose a dark theme in the settings menu. Google says that it plans to continue to make speech translation available in a variety of situations. Currently, the feature works best in a quiet environment, with one person speaking at a time.

Google says that in other environments, the app will do its best to give the user an understanding of what's being said. The app also has a Conversation mode that Google says will continue to help users have a back-and-forth translated conversation with someone.

In other recent Google news, alleged pricing on the Pixel 4a leaked suggesting the phone will sell for $399. The device has decent hardware for the money, including a Snapdragon 730 SoC, 6GB of RAM, and 64GB of internal storage.