Can’t find the Android app all of your friends have been recommending? Its absence is likely intentional. Google Play will soon get rid of apps that do not incorporate the latest privacy and security features.

According to Android for Developers, “existing apps that don’t target an API level within two years of the latest major Android release version will not be available for discovery or installation for new users with devices running Android OS versions higher than apps’ target API level.” Both new apps and app updates must meet the target API in order to be published. Those who have previously installed the app will still be able to find and download it, but existing apps that do not meet the target API will not be able to reach new users. 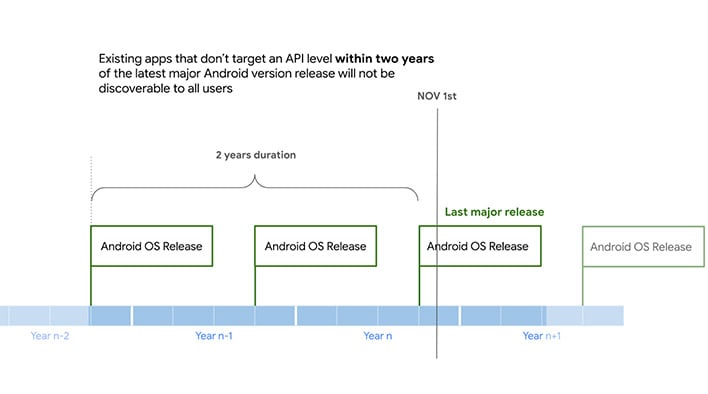 Developers ideally should frequently update their apps so that they meet the current target API level as “each Android OS update brings privacy, security, and user experience improvements.” However, older apps often slip through the cracks as long as they do not push out updates and otherwise continue to follow Google Play’s policies. Google Play was previously only particular about new apps meeting the target API within one year of a major Android OS version release. This now changes with the new policy update.

The timeline for these updates are as follows:
It should be noted that developers can request an optional 6 month extension. However, it's said Google Play’s policy change should not be much of an issue as most apps are already compliant. The hope is that the new policy will “expand user protections and improve user experiences on Google Play.”

Images courtesy of Android for Developers.